Monday, September 16, 2013 Posted by Real Estate Snatch
According to statistics released today by The Canadian Real Estate Association (CREA), national home sales posted a month-over-month increase in August 2013.
Highlights:
The number of home sales processed through the MLS® Systems of Canadian real estate Boards and Associations and other co-operative listing systems rose 2.8 per cent on a month-over-month basis in August 2013. The number of local markets where sales improved on a month-over-month basis ran roughly even with those where activity edged lower in August, with increases in major urban centres tipping the balance. 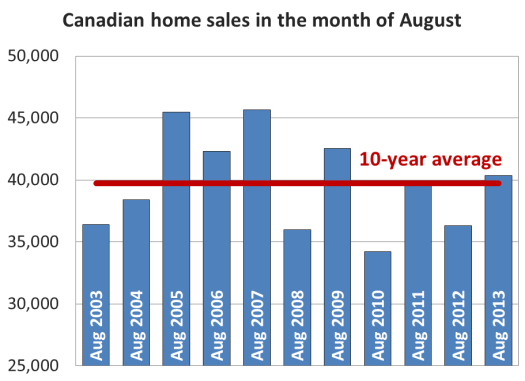 “All real estate is truly local, but sometimes sales trends can change similarly in a large number of markets at the same time due to factors that can affect all markets across Canada,” said CREA President Laura Leyser. “The recent hike in fixed mortgage rates is one example of an influence that affects all markets, but it’s just one of many things that shape housing market trends. Your local REALTOR® remains the best resource for understanding what’s driving the housing market where you live or might like to.”

Actual (not seasonally adjusted) activity came in 11.1 per cent ahead of levels reported in August 2012 to run roughly in line with its 10-year average. Sales were up on a year-over-year basis in about two-thirds of local markets, led by double-digit gains in Vancouver Island, Victoria, Greater Vancouver, the Fraser Valley, Calgary, Edmonton and Greater Toronto.

“Sales activity dropped sharply around this time last year in the wake of tightened mortgage rules and has improved since then, so a sizeable year-over-year increase this August was expected,” said Gregory Klump, CREA’s Chief Economist. “Buyers who put off purchase decisions or who were otherwise sidelined by tighter mortgage rules and lending guidelines implemented last year were anticipated to return to the housing market. That said, the upward trend and levels for activity in recent months has been steeper than expected, but that may not last.”

“Recent increases to fixed mortgage rates caused sales to be pulled forward as buyers with pre-approved financing at lower rates jumped into the market sooner than they might have otherwise,” Klump added. “That pool of homebuyers has largely evaporated so demand may soften over the fourth quarter. The outsized year-over-year gains may persist, however, due to weak sales toward the end of last year.”

Some 325,180 homes have traded hands across the country so far this year. That stands 2.9 per cent below levels recorded in the first eight months of 2012. Notwithstanding the recent upward trend in demand, CREA still expects the 2013 annual sales figure to come in below the 2012 figure.
The number of newly listed homes rose 1.8 per cent on a month-over-month basis in August. Slightly more than half of all local markets recorded gains. As with sales activity, that list includes many of Canada’s most active housing markets.

With sales activity having risen by slightly more than new listings in August, the national sales-to-new listings ratio edged up to 54.6 per cent compared to 54.1 per cent in July. While the national housing market has firmed slightly in recent months, it remains firmly rooted in balanced market territory where it has been since early 2010.

Based on a sales-to-new listings ratio of between 40 to 60 per cent, a record 73 per cent of all local markets were in balanced market territory in August.

The number of months of inventory is another important measure of balance between housing supply and demand. It represents the number of months it would take to completely liquidate current inventories at the current rate of sales activity. There were 5.9 months of inventory at the national level at the end of August, down from 6.1 months one month earlier. As with the sales-to-new listings ratio, the current months of inventory measure marks a slightly firmer but still well balanced market.
The actual (not seasonally adjusted) national average price for homes sold in August 2013 was $378,369, an increase of 8.1 per cent from the same month last year. Year-over-year average price gains in recent months reflect outsized sales declines last year among some of Canada’s larger and more expensive markets as a proportion of national activity. For example, Greater Vancouver’s long-term (10 year) average proportion of national activity is 7.4 per cent on an unadjusted basis but it had fallen to 4.6 per cent in August 2012. Since then, it has rebounded and now stands at 6.3 per cent – its second-highest level in the past year.

If Greater Toronto and Greater Vancouver are removed from the national average price calculation, the year-over-year increase is cut from 8.1 per cent to 4.8 per cent. A better gauge of what’s going on with prices is the MLS® Home Price Index (MLS® HPI), which is not affected by changes in the mix of sales the way that average price is.

The Aggregate Composite MLS® HPI rose 2.92 per cent compared to August 2012, up from 2.66 per cent in July. That said, year-over-year growth in the price index has slowed since late 2011 and has ranged between two and three per cent for the past seven months. 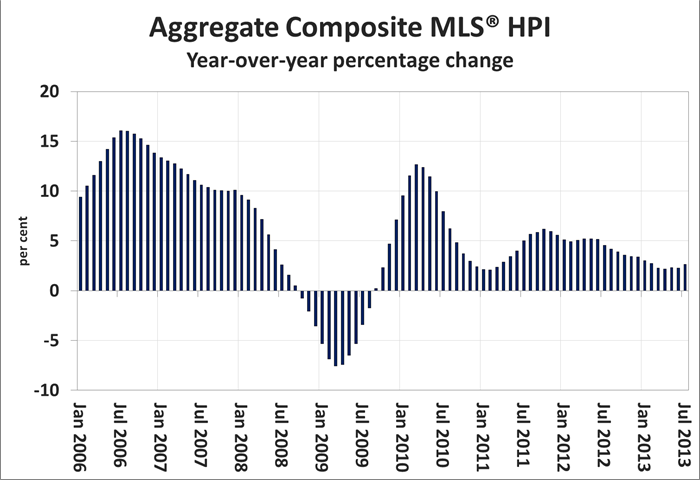 Year-over-year price growth in the MLS® HPI was mixed across the markets tracked by the index.
PLEASE NOTE: The information contained in this news release combines both major market and national sales information from MLS® Systems from the previous month.

Watch Video of Stats and Economics:  Courtesy of (CREA)