The Canadian Real Estate Association (CREA) has updated its forecast for home sales activity via the Multiple Listing Service® (MLS®) Systems of Canadian real estate Boards and Associations for 2013 and 2014.

CREA’s previous two forecasts anticipated that national sales activity in 2013 would improve following the slow start to the year, buoyed by the continuation of low interest rates amid a constructive economic backdrop and the return of buyers who deferred purchase decisions or were otherwise sidelined in the wake of tighter mortgage rules and lending guidelines implemented last year.

National sales have improved more quickly than anticipated. This likely reflects the transient influence of buyers with pre-approved financing making purchases before their lower pre-approved rates expire, particularly in some of Canada’s most active and expensive housing markets. 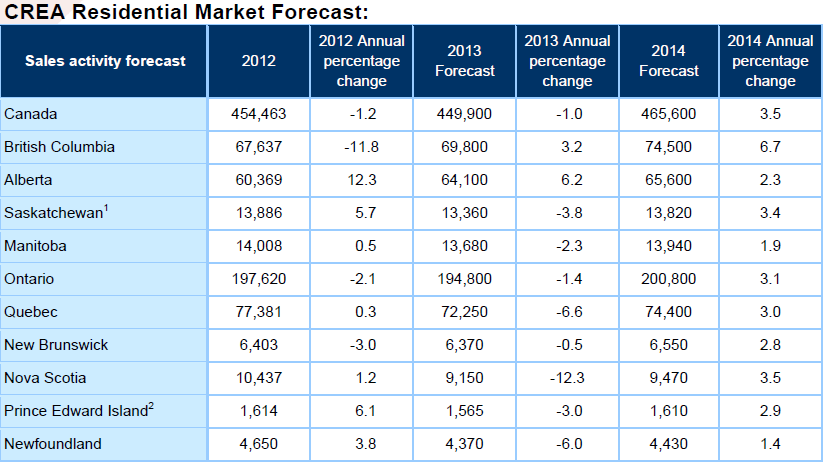 “Real estate markets can be very different depending on the region and community due to local factors,” said Laura Leyser, CREA President. “For that reason, buyers and sellers should talk to their REALTOR® about the housing market outlook where they live or might like to.”

Sales are forecast to reach 449,900 units in 2013. This represents a decline of one per cent from last year and marks the sixth consecutive year for which activity will have held to within short reach of 450,000 units.

In 2014, national activity is forecast to reach to 465,600 units, a rebound of 3.5 per cent, and in line with its 10-year-average. The forecast increase reflects a gradual strengthening of sales activity alongside further economic, job, and income growth combined with only slightly higher mortgage interest rates.

British Columbia is still forecast to post the strongest sales increase in 2014 (+6.7%) compared to a weak result in 2013. Most other provinces are forecast to post gains in the range between two and four per cent.

Average prices have also remained firmer than expected due to a rise in the share of national sales among larger and pricier markets compared to last year. 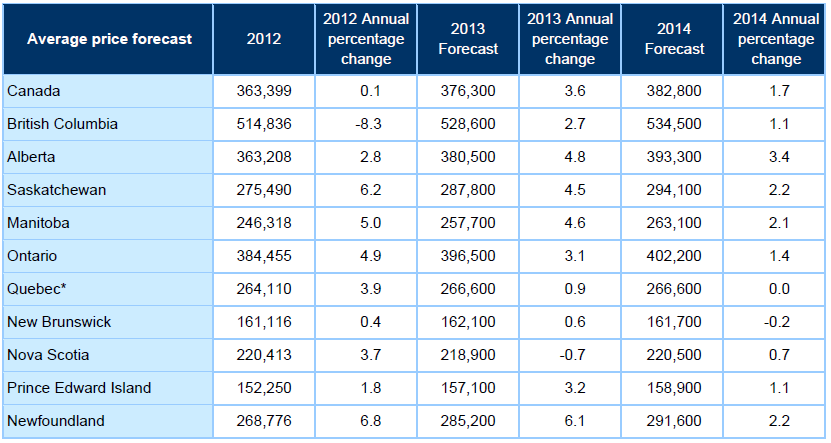 “The environment for home prices in Quebec, New Brunswick, and Nova Scotia will likely be shaped by ample inventory levels relative to sales,” said Gregory Klump, CREA’s Chief Economist. “The balance between the two indicates that buyers have an abundance of listings from which to choose in those provinces, which could keep pricing prospects in check until sales draw down inventories.”

The national average price is forecast to edge up a further 1.7 per cent in 2014 to $382,800. Alberta is forecast to see the biggest average price increase in 2014 (3.4 per cent), with gains in Saskatchewan, Manitoba, and Newfoundland and Labrador running just ahead of overall consumer price inflation. Average prices in Quebec and New Brunswick are expected to remain stable in 2014, with other provinces eking out gains ranging from 0.5 to 1.5 per cent.

About The Canadian Real Estate Association