Toronto is catching up by becoming a city of Multi Million Condos for local and foreign buyers as Canada's most expensive property market, Vancouver, has also been a big draw for local and foreign buyers of Multi Million Condos. The global record for the highest sale price of Condo is the $221 million that Some Billionaire Buyer recently paid for a pied-a-terre in London, the runer up was a New York's Condo buyer that broke the record for sale price by paying a reported $90 million for a duplex penthouse in One57, a building under construction at 157 West 57th Street. that set a record for the highest price ever paid for a Manhattan apartment.

After the first record sale price of the Penthouse Suit at The Four Season Residence last year for $28M, now a listing at The Cumberland Apartment in the City of Toronto is seeking to tie the record for Toronto’s highest Condo Sale. 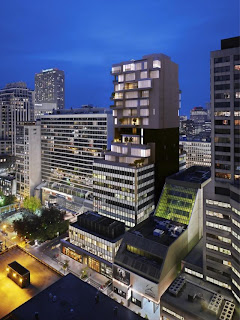 The unit featuring an expansive floor plan 10,200 square feet on two floors with all the best of luxury amenities, and designed by renowned architect Philip Johnson, the Condo unit is causing a buzz among the city's elite.

With 40 billionaires, Canada is home to the eighth largest population of ultra-rich individuals, or those with $30 million or more in total assets.

Canada was ranket 7th in The World's Hottest Real Estate Markets based on research by global real estate consultancy Knight Frank , which ranks countries according to highest average growth in housing prices from the fourth quarter of 2006 to the same period in 2011


So, what does $28M Condo look like ? CBC's Amanda of the CBC’s Lang & O’Leary Exchange took a grand tour of the unit recently.

More information about this $28M Condo at 155 Cumberland St in Toronto. Ontario, M5R 1A2. You can also learn more about buying and selling your home search more MLS listing of luxury new Condo or Single Family Properties, more Toronto homes for sale here.