Tuesday, January 15, 2013 Posted by Real Estate Snatch
According to statistics released today by The Canadian Real Estate Association (CREA), national home sales activity was little changed on a month-over-month basis in December 2012, holding it in line with levels reported in August when demand first geared down in the wake of tighter mortgage lending rules.


The number of home sales processed through the MLS® Systems of real estate Boards and Associations in Canada edged down 0.5 per cent on a month-over-month basis in December 2012. While sales activity was little changed nationally, it picked up in just over half of all local markets in December.

“National sales activity continues to hold fairly steady at lower levels since mortgage rules were changed earlier in 2012, but there are still some real differences in trends between and within local housing markets,” said CREA President Wayne Moen. “As always, all real estate is local, so buyers and sellers should speak to their REALTOR® to appreciate how the housing market is shaping up where they live or are considering living.”

Actual (not seasonally adjusted) activity came in 17.4 per cent below December 2011 levels. Four of every five local markets posted a year-over-year declines in sales activity in December. Calgary remained a notable exception, with activity there having risen seven per cent year-over-year.
Sales were handicapped by December 2012’s five full weekends, since far fewer transactions take place on weekends. This trading day effect is among factors taken into account by seasonal adjustment.

“Similar to what we saw in September, December sales had fewer business days compared to the same month last year and most other years,” said Gregory Klump, CREA Chief Economist. “It factored into December’s year-over-year decline in sales activity.”
A total of 453,372 homes traded hands over Canadian MLS® Systems in 2012. This was down 1.1 per cent from annual activity in 2011, and 1.4 per cent below the 10-year average (2002 through 2011).
This marks the fifth straight year that annual home sales activity has held to within short reach of 450,000 units. “Successive rounds of tightening mortgage regulations have kept the housing market in check during what has become an extended low interest rate environment,” said Klump.
The number of newly listed homes fell a further 1.3 per cent month-over-month in December. Combined with monthly declines of 1.1 per cent in November and 4.1 per cent in October, new supply reached its lowest level since March 2011.
While Greater Toronto posted the largest decline, new listings were down in half of all local markets in December including Greater Vancouver, the Fraser Valley, and Vancouver Island.

“The decline in new supply may reflect purchase offers below asking price that are made to sellers who are under no pressure to sell. Instead they choose to take their homes off the market once their listing expires,” Klump said. “In the absence of economic stresses like a spike in interest rates or a sharp drop in employment, this dynamic can be expected to keep the housing market in balance.“
With sales and new listings moving lower, the national sales-to-new listings ratio was little changed at 50.8 per cent in December compared to 50.4 per cent in November. Based on a sales-to-new listings ratio of between 40 to 60 per cent, three out of every five local markets were in balanced market territory in December.

The number of months of inventory is another important measure of balance between housing supply and demand. It represents the number of months it would take to sell current inventories at the current rate of sales activity, and it too was little changed in November.

REALATED: GTA REALTORS® Release Monthly Resale Housing Figures: Sales Dip in November while Selling Prices Increase[Video] [Info graphic]
The 2012 national average price for homes sold through the MLS® Systems of real estate Boards and Associations in Canada was $363,740, up 0.3 per cent from 2011. Netting Greater Vancouver and Greater Toronto from the annual figure yields a gain of 2.8 per cent.


Unlike average price, the MLS® Home Price Index (MLS® HPI) is not affected by changes in the mix of sales, so it provides the best gauge of Canadian home price trends. 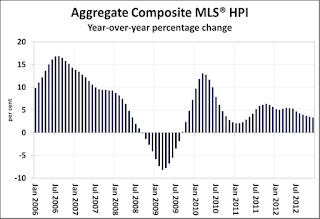 The Aggregate Composite MLS® HPI rose 3.3 per cent on a year-over-year basis in December.
This marks the eighth time in as many months that the year-over-year gain shrank and is the slowest rate of increase since April 2011.

By contrast, the MLS® HPI saw year-on-year growth accelerate in Calgary (+7.4%) and Greater Montreal (+3.3%). In Greater Vancouver, the MLS® HPI posted a 2.3 per cent year-over-year decline in December.
PLEASE NOTE: The information contained in this news release combines both major market and national MLS® sales information from the previous month.