Industrial properties accounted for 83 per cent leased space reported in the last three months of 2012. The average industrial lease rate, for properties leased on a per square foot net basis and for which pricing was disclosed, was down slightly from last year, at $4.65 for Q4 2012 versus $4.92 for Q4 2011.

“There were a substantial number of lease transactions in the Fourth Quarter of 2012, but the level of activity remained lower than in the same period in 2011. While the Canadian economy continued to grow in 2012, the pace of growth was somewhat anemic, especially where the export sector was concerned.

The high value of the Canadian dollar continued to be a competitive disadvantage to export-focussed firms. In addition, economic uncertainty in the United States coupled with global economic headwinds, prompted many exporters to remain on the sidelines in 2012 with regard to real estate investment,” said TREB Commercial Division Chair Cynthia Lai.

There were 214 commercial property sales reported through the TorontoMLS system in the Fourth Quarter of 2012 – down from 300 sales in the Fourth Quarter of 2011. Sales were down for all property types on a year-over-year basis. The number of industrial sales was closest to last year’s level – down by 17 per cent to 97 transactions. Commercial/retail and office transactions were down by 28 and 49 per cent respectively.

Average sale prices per square foot, based on transactions for which selling prices were disclosed, were up substantially for the industrial and commercial/retail segments. Over the same period, the average selling price for office properties was down. “Given that the pace of sales was slower this year compared to last, the large average selling price increases for industrial and commercial/retail properties were more associated with a change in the composition of sales. For example, in the Fourth Quarter of 2012, there was greater proportion of industrial sales in smaller size categories compared to the Fourth Quarter of 2011. All else being equal, smaller properties tend to sell at a higher price per square foot,” continued Lai.
. 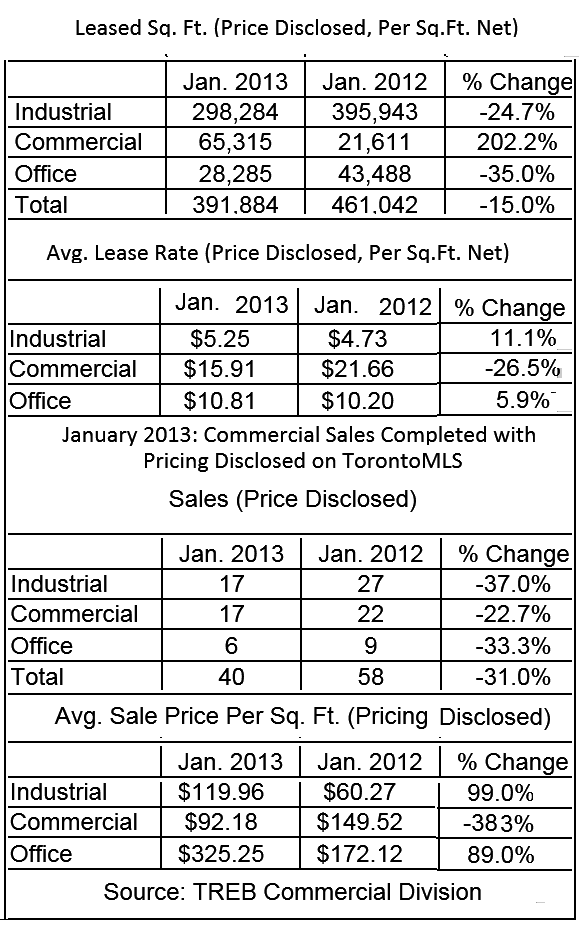