According to statistics released today by The Canadian Real Estate Association (CREA), national resale housing activity improved in February 2012 after having
declined in January.

Highlights:
Sales activity recorded through the MLS® Systems of Canadian real estate Boards and Associations edged up 1.4 per cent from January to February 2012, recouping one-third of the monthly decline in activity between December 2011 and January 2012.

Activity was up on a month-over-month basis in half of all local markets in February, led by Calgary, Toronto, Barrie, Montreal, Quebec City, Saint John, and Halifax-Dartmouth.

The number of newly listed homes also rebounded 1.9 per cent on a month-over-month basis in February, reaching the highest level since May 2010. A rebound in new listings in Toronto and Montreal, Canada’s two most active markets, offset a retreat in new listings in Vancouver, Canada’s third largest market.

With both sales and new listings having risen, the national sales-to-new listings ratio, a measure of market balance, was little changed in February (53.3 per cent) compared to January (53.6 per cent) and remains firmly in balanced market territory.

“The national rise in both sales activity and the number of newly listed homes beyond the normal seasonal increase provides clear evidence that Canadians are confident in housing market prospects,” said Gary Morse, CREA’s President. “Confidence varies by region, as do prospects for housing demand. For that reason, buyers and sellers should talk to their local REALTOR® to understand current and prospective trends in their local housing market.” 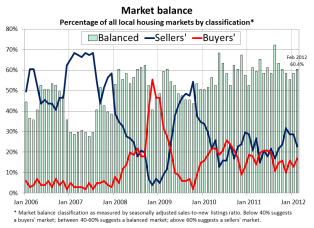 Based on a sales-to-new listings ratio of between 40 to 60 per cent, 60 per cent of local markets were balanced in February. Compared to the previous month, there were more buyers’ markets and fewer sellers’ markets.

The actual (not seasonally adjusted) national average price for homes sold in February 2012 was $372,763, up two per cent from its reading for the same month last year.

“In February 2011, the national average price was stretched upward by a spike in high-end home sales in some of Vancouver’s priciest neighbourhoods, and a replay of that was not expected this year,” said Gregory Klump, CREA’s Chief Economist. “February’s data bear this out, but other factors are now keeping the national average price aloft. The main one is the housing market in Toronto, where a tight balance between supply and demand continues to drive some of the strongest home price gains in the country, particularly for single detached properties.”

There has been a preference in recent months, in Toronto and other markets, for single family homes which are typically more expensive. This trend held in February, putting additional upward pressure on the national average home price.

CREA cautions that average price information can be useful in establishing trends over time, but does not indicate actual prices in centres comprised of widely divergent neighbourhoods or account for price differential between geographic areas.

Statistical information contained in this report includes all housing types.

The Canadian Real Estate Association (CREA) is one of Canada’s largest single-industry trade associations, representing more than 100,000 REALTORS®working through more than 100 real estate Boards and Associations.