Toronto's 'Sky Park' Is The City's Answer To High Line Envy Toronto is getting its own overground playground,[Video]

Real estate company Ivanhoé Cambridge, and Metrolinx, the Province of Ontario’s regional transportation agency for the Greater Toronto and Hamilton Area, announced today an agreement that sets the stage for a forward-looking, integrated office and transit development in downtown Toronto.

Subject to pre-leasing progress, project construction could commence as early as spring 2015, with the new GO Bus Terminal to open approximately three years after the beginning of construction, and the first office tower to be completed within the months following the opening of the Terminal. The development will feature:


“We want this project to be iconic for Toronto through inspired design and intelligent integration of public transit with green spaces,” said Daniel Fournier, Chairman and Chief Executive Officer, Ivanhoé Cambridge. “Our partnership with Metrolinx strongly reinforces the attractiveness of our office development project. By working with public authorities on finding smart transit solutions for downtown Toronto, we demonstrate how sustainable development can create value for the community and for our future tenants.

For his part, Metrolinx Chair Robert Prichard remarked: “We are pleased to be working with Ivanhoé Cambridge to build a new downtown Toronto Bus Terminal to bring bus and train services to a centralized location, allowing for improved transit options and an improved customer experience. An integrated development that provides transit, improved public space and connects communities is an example of Metrolinx’s Regional Transportation Plan to provide travellers with improved connections to more transit.” 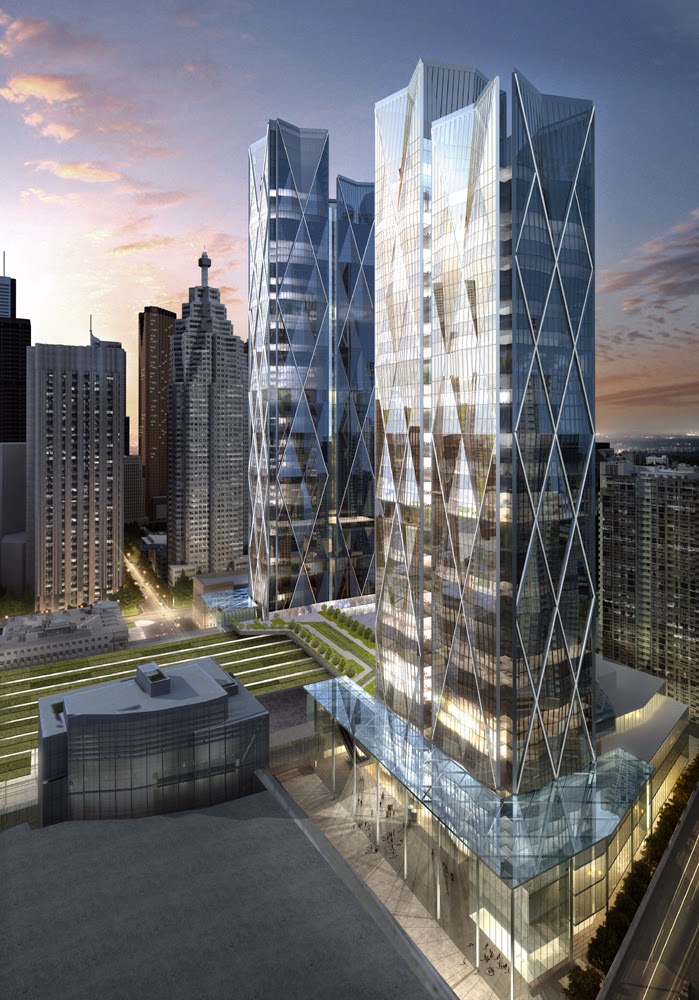 excellent example of what can happen when partners work together to invest in our communities. Today's announcement of a new GO Bus Terminal at Union Station with commercial space above it aligns perfectly with our government's plan to create transit hubs integrated with sustainable employment developments.” He added: “This new Terminal will welcome GO Transit's fleet of environmentally friendly double-decker buses to downtown Toronto, and will provide more options for commuters and tourists alike moving across the Greater Toronto and Hamilton Area."

And Paul Gleeson, Executive Vice President, Global Development, Ivanhoé Cambridge, said: “Our plan is to build a major, next-generation office tower complex designed to meet LEED® Platinum certification, with all the expected features of a AAA property. Building on several years of experience in developing first-class office buildings in North America and Europe, we are in a position to leverage our capabilities to deliver a superior project that contributes positively to the Toronto urban fabric and skyline. 45-141 Bay St. will be an architectural landmark of downtown Toronto, while offering best-in-market premises for our tenants.”

Following an International Architectural Design Competition, Ivanhoé Cambridge and Metrolinx selected Wilkinson Eyre, a London, UK-based architectural firm, to be the design architect for the project. The architects of record are Adamson Associates, a Toronto-based firm well-known for its participation in numerous large-scale projects around the world, including the Petronas Towers in Kuala Lumpur, Canary Wharf in London and the World Financial Center in New York City.

Ivanhoé Cambridge is a world-class real estate company that leverages its high-level expertise in all aspects of real estate including investment, development, asset management, leasing and operations, to deliver optimal returns for its investors. Its assets, held through multiple subsidiaries and located mainly in Canada, the United States, Europe, Brazil and Asia, totalled more than Cdn$40 billion as at December 31, 2013. Its portfolio consists mainly of shopping centres, office and multiresidential properties. Ivanhoé Cambridge is a real estate subsidiary of the Caisse de dépôt et placement du Québec lacaisse.com, one of Canada's leading institutional fund managers.