Housing starts in the Toronto Census Metropolitan Area (CMA) trended lower at 29,720 units in September compared to 30,050 in August according to Canada Mortgage and Housing Corporation (CMHC). The trend is a six month moving average of the monthly seasonally adjusted annual rates (SAAR) 1 of housing starts. 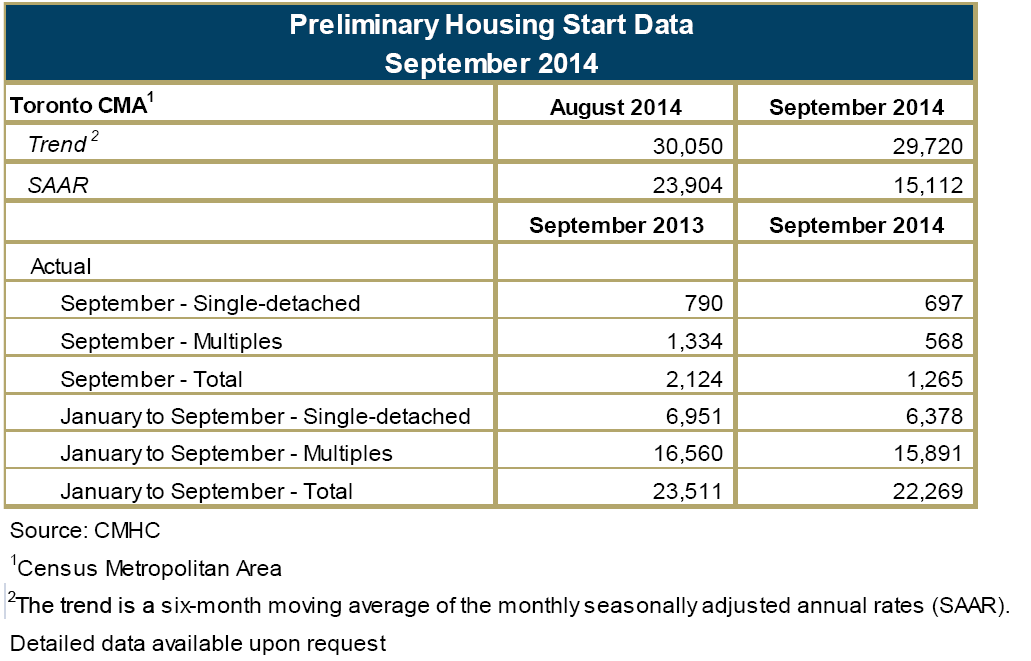 'Total housing starts trended lower due to fewer apartment starts. Variations in condominium apartment starts are common due to the altering lengths in time it takes for projects to reach sales targets before construction can commence. Slower sales witnessed during mid 2012 to mid 2013 have translated to fewer starts," said Dana Senagama, CMHC's Toronto Senior Market Analyst. 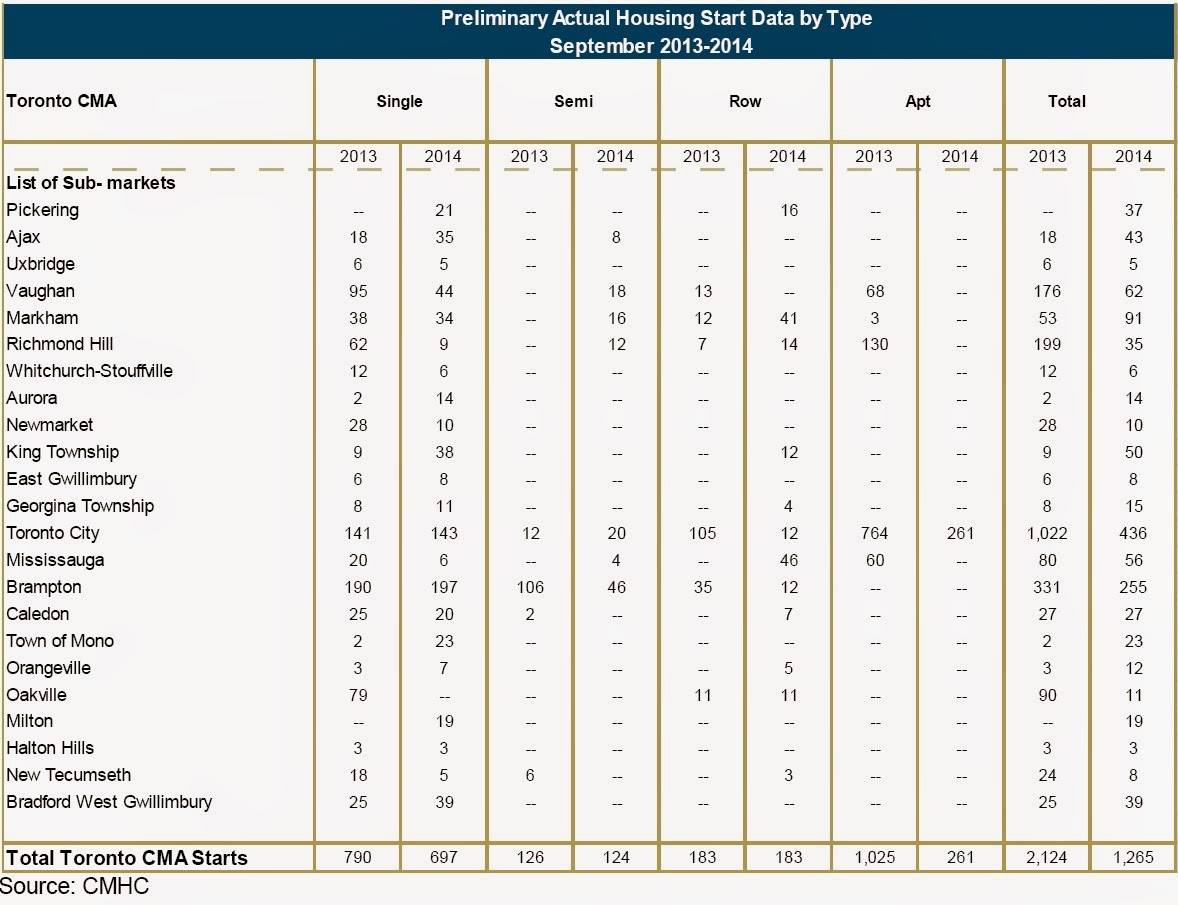 CMHC uses the trend measure as a complement to the monthly SAAR of housing starts to account for considerable swings in monthly estimates and obtain a more complete picture of the state of the housing market. In some situations, analysing only SAAR data can be misleading in some markets, as they are largely driven by the multiples segment of the markets which can be quite variable from one month to the next.

The stand alone monthly SAAR was 15,112 units in September, down from 23,904 units in August. The decrease was mainly attributed to lower starts in the multi-unit segment. 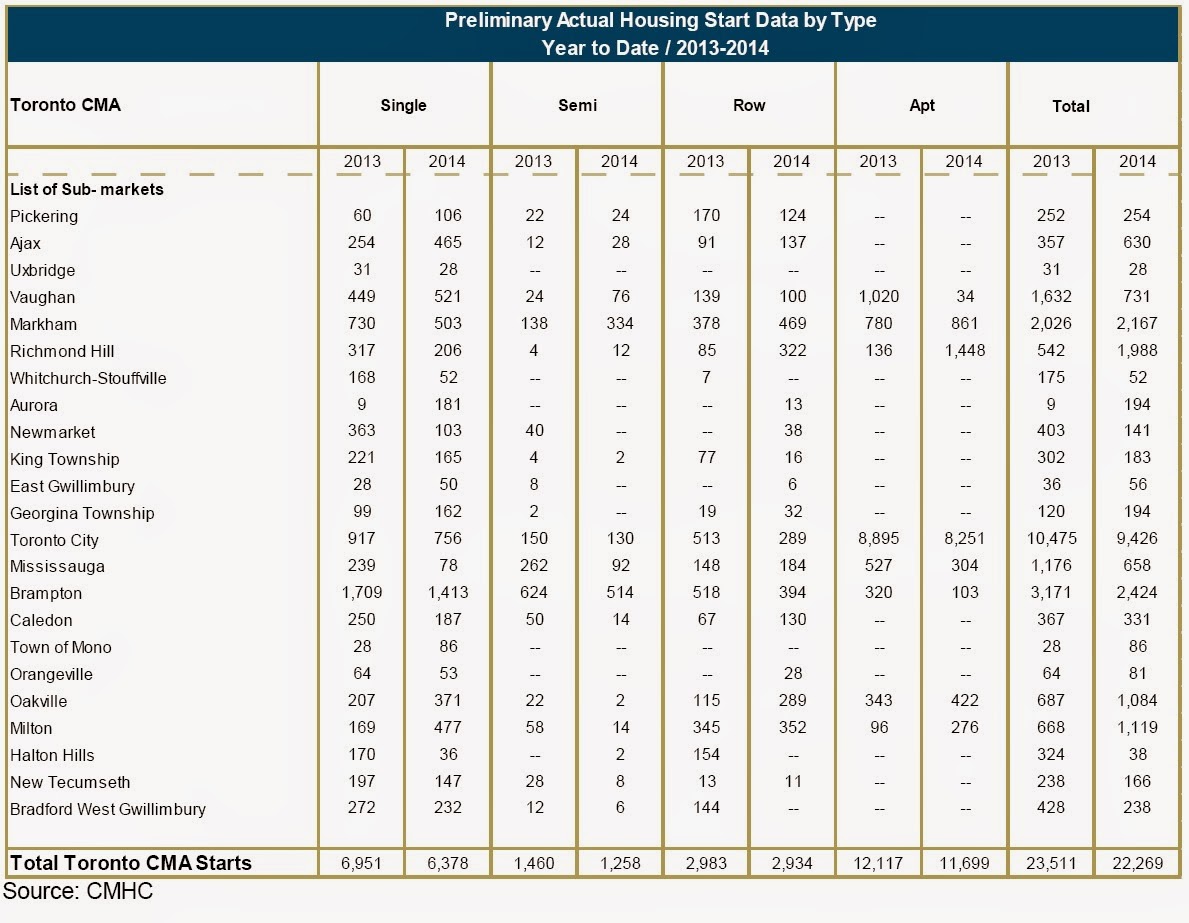 The City of Toronto recorded the highest number of starts in September, which was followed by Brampton and Markham. Toronto's housing starts were mostly comprised of condominium apartments, and it was the only part of the CMA to see apartment construction started this month.
Preliminary Housing Starts data is also available in English and French at the following link:

1 All starts figures in this release, other than actual starts and the trend estimate, are seasonally adjusted annual rates (SAAR) - that is, monthly figures adjusted to remove normal seasonal variation and multiplied by 12 to reflect annual levels. By removing seasonal ups and downs, seasonal adjustment allows for a comparison from one season to the next and from one month to the next. Reporting monthly figures at annual rates indicates the annual level of starts that would be obtained if the monthly pace was maintained for 12 months. This facilitates comparison of the current pace of activity to annual forecasts as well as to historical annual levels.