The trend measure of housing starts in Canada was 197,747 units in September compared to 191,095 in August, according to Canada Mortgage and Housing Corporation (CMHC). The trend is a six-month moving average of the monthly seasonally adjusted annual rates (SAAR)1 of housing starts.

“The increase in the trend reflects stronger starts activity since April, largely concentrated in multi-unit dwellings including condominiums,” said Bob Dugan, CMHC’s Chief Economist. “However, the currently elevated level of condominium units under construction supports our view that condominium starts should trend lower over the coming months.”

CMHC uses the trend measure as a complement to the monthly SAAR of housing starts to account for considerable swings in monthly estimates and obtain a more complete picture of the state of the housing market. In some situations analyzing only SAAR data can be misleading, as they are largely driven by the multi-unit segment of the market which can be quite variable from one month to the next. 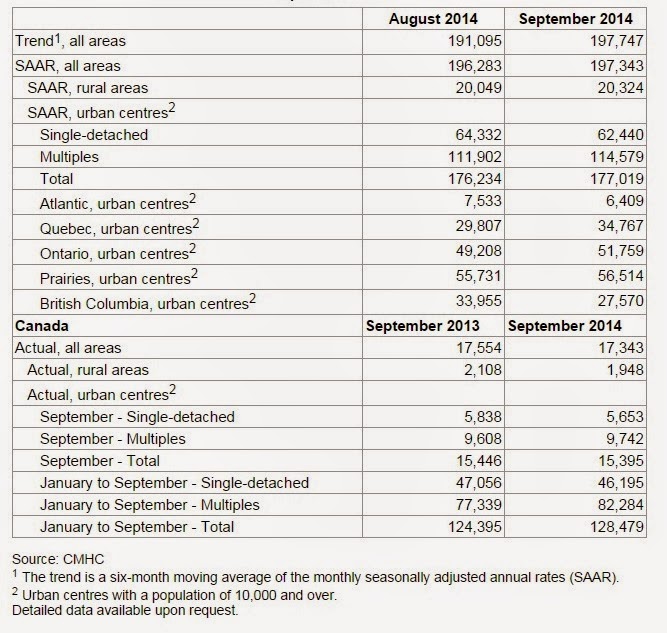 In September, the seasonally adjusted annual rate of urban starts decreased in British Columbia and Atlantic Canada, and increased in Quebec, Ontario and the Prairies.

Rural starts2 were estimated at a seasonally adjusted annual rate of 20,324 units. 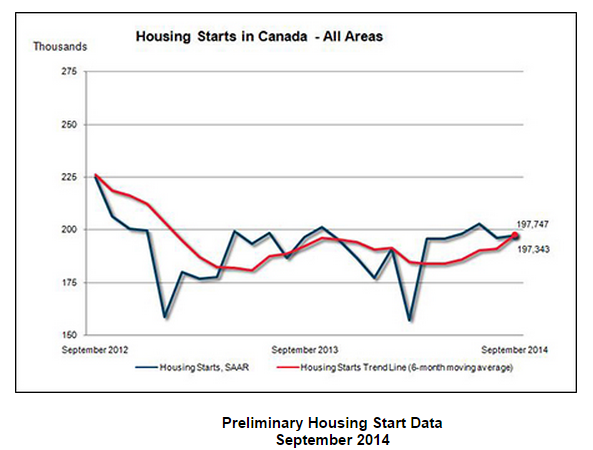 1 All starts figures in this release, other than actual starts and the trend estimate, are seasonally adjusted annual rates (SAAR) — that is, monthly figures adjusted to remove normal seasonal variation and multiplied by 12 to reflect annual levels. By removing seasonal ups and downs, seasonal adjustment allows for a comparison from one season to the next and from one month to the next. Reporting monthly figures at annual rates indicates the annual level of starts that would be obtained if the monthly pace was maintained for 12 months. This facilitates comparison of the current pace of activity to annual forecasts as well as to historical annual levels.

2 CMHC estimates the level of starts in centres with a population of less than 10,000 for each of the three months of the quarter, at the beginning of each quarter. During the last month of the quarter, CMHC conducts the survey in these centres and revises the estimate.