Canadian municipalities issued building permits worth $9.2 billion dollars in July, up 11.8% from June and the fourth consecutive monthly advance. The increase in July was mainly attributable to higher construction intentions for multi-family dwellings in Ontario and British Columbia as well as institutional buildings in Manitoba.
Chart 1
Total value of permits 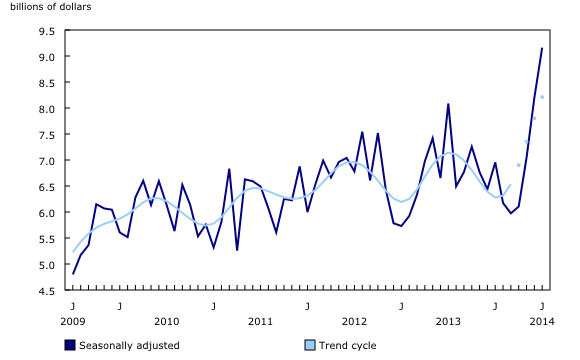 Note(s):
The higher variability associated with the trend-cycle estimates is indicated with a dotted line on the chart for the current reference month and the three previous months. See note to readers.
Chart description: Total value of permits
CSV version of chart 1
The value of residential building permits increased for the fifth consecutive month, up 18.0% to $5.0 billion in July. Gains were posted in seven provinces, led by Ontario and British Columbia, with Alberta a distant third. The largest decline occurred in Nova Scotia.
In the non-residential sector, the value of permits rose 5.2% to a record high $4.2 billion. This represented a fourth consecutive monthly increase. Gains were recorded in six provinces, with Manitoba accounting for most of the increase. In contrast, the largest decline occurred in Alberta, followed by Quebec. Both provinces posted large gains the previous month.

The value of building permits for multi-family dwellings rose 43.4% to $2.5 billion in July, after a 4.5% decrease the previous month. This gain was primarily the result of higher construction intentions for apartment and apartment-condominium projects in Ontario, British Columbia and, to a lesser extent, Alberta.
Canadian municipalities issued permits for single-family dwellings worth $2.4 billion in July, a slight decrease of 0.5%, after three consecutive monthly increases. The value of single-family dwelling permits declined in five provinces, with the largest decrease occurring in Ontario. Alberta saw the largest increase, followed by Saskatchewan and Nova Scotia.
At the national level, municipalities approved permits for the construction of 20,511 new dwellings, up 21.4% from June. This increase was attributable to multi-family dwellings, which rose 35.2% to 14,050 units. In contrast, the number of single-family dwellings edged down 0.6% to 6,461 units.
Chart 2
Residential and non-residential sectors 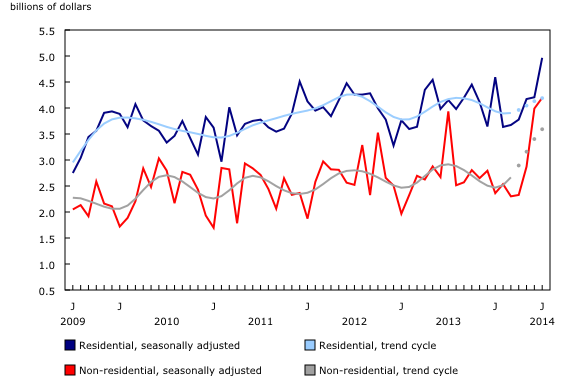 Note(s):
The higher variability associated with the trend-cycle estimates is indicated with a dotted line on the chart for the current reference month and the three previous months. See note to readers.
Chart description: Residential and non-residential sectors
CSV version of chart 2

The value of permits increased in five provinces, with the largest gain in Ontario, followed by British Columbia and Manitoba.
Most of the gain in Ontario and British Columbia was attributable to multi-family dwellings, while the increase in Manitoba came from the institutional component and, to a lesser extent, the commercial component.
Quebec posted the largest decline, followed by Newfoundland and Labrador and Nova Scotia. The decrease in Quebec was mainly because of a 65.3% decline in construction intentions for industrial buildings. Newfoundland and Labrador's decrease was attributable to lower construction intentions for commercial buildings, while in Nova Scotia, lower construction intentions for multi-family dwellings were responsible for the decrease.

Unless otherwise stated, this release presents seasonally adjusted data, which facilitates comparisons by removing the effects of seasonal variations. For more information on seasonal adjustment, see Seasonally adjusted data – Frequently asked questions.
The Building Permits Survey covers 2,400 municipalities representing 95% of the population. The communities representing the other 5% of the population are very small, and their levels of building activity have little impact on the total for the entire population.
Building permits data are used as a leading indicator of activity in the construction industry.
The value of planned construction activities shown in this release excludes engineering projects (for example, waterworks, sewers or culverts) and land.
For the purpose of this release, the census metropolitan area of Ottawa–Gatineau (Ontario/Quebec) is divided into two areas: Gatineau part and Ottawa part.