Extraordinarily bleak winter weather made for a slow start to 2014 national sales activity. As the first quarter ended, sales momentum heading into spring was constrained by a continuing shortage of listings in a number of local markets. The rise in newly listed properties in April and May supported an increase in sales activity. 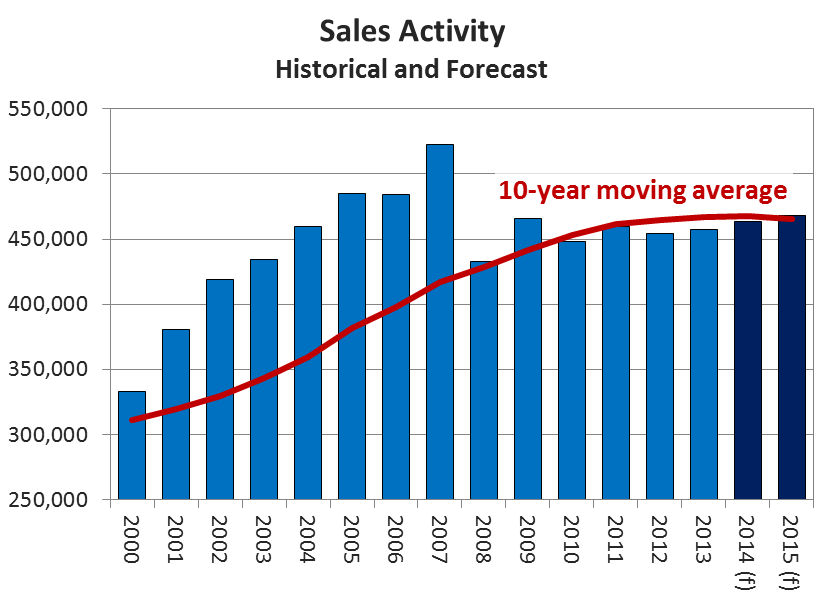 The deferral of sales and listings reflects a delayed start to the spring home buying season, with combined sales for the period from March to May coming in largely as anticipated and at average levels. These deferrals are now likely to have been largely depleted, which suggests that the strength of sales momentum heading into the summer may be transient.

CREA’s forecast for sales activity in 2014 is largely unchanged from its previous forecast published in March. At that time, interest rates had been expected to start to edge higher in the second half of the year. However, it now appears that interest rates may not begin to rise until closer to the end of the year, which remains supportive for home ownership affordability over the balance of 2014. 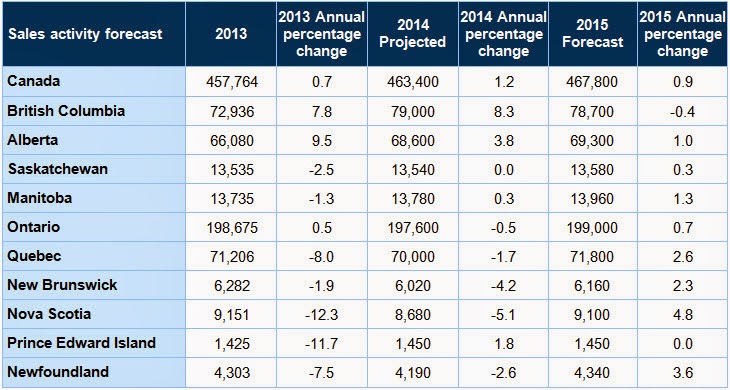 Activity is still expected to remain in line with its 10‐year average and to hold within fairly short reach of 450,000 units for the seventh consecutive year (Chart A). 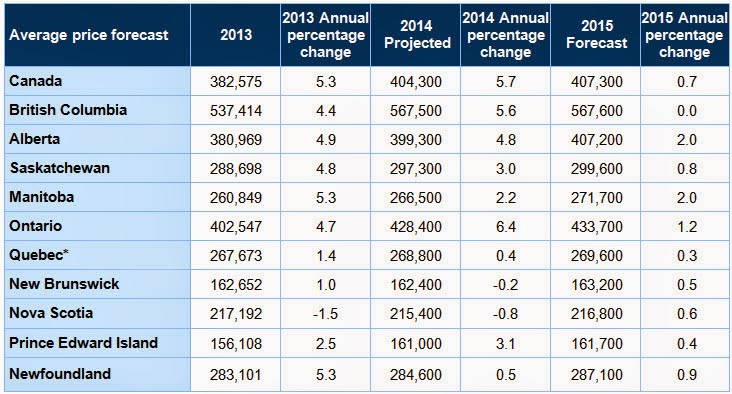 British Columbia is forecast to post the largest year‐over‐year increase in activity (8.3 per cent), and make the biggest contribution to the increase in national sales activity. B.C.’s projected increase in sales this year largely reflects a slow start to 2013.

Alberta’s annual sales are projected to rise by +3.8 per cent increase in 2014, while activity in Saskatchewan, Manitoba, and Ontario is expected to be roughly in line with 2013 levels. Sales are forecast to fall by 1.7 per cent and Quebec, 4.2 per cent in New Brunswick in 2014, 5.1 per cent in Nova Scotia, and by 2.6 per cent in Newfoundland and Labrador.

In 2015, the outlook for the economy, jobs and incomes is one of further improvement, accompanied by a slow and gradual increase in fixed and variable mortgage interest rates.

On balance, these two opposing factors should most benefit housing markets where sales are currently softer but prices remain more affordable. Sales in relatively less affordable housing markets are likely to be more sensitive to higher fixed mortgage rates, whether from the standpoint of higher monthly mortgage payments or qualification for mortgage financing based on the posted five‐year mortgage interest rate.

As such, provinces east of Ontario are expected to post the largest gains in activity in 2015 in the range of around 2.5 to five per cent, while sales in provinces from British Columbia to Ontario are forecast to remain little changed.

National activity is now forecast to reach 467,800 units in 2015, representing a further annual increase of 0.9 per cent. This would result in sales staying in line with the 10‐year average for the eighth year in a row.

Average prices have remained firm and continue to reflect a rise in the share of national sales among some of Canada’s most active and expensive markets compared to last year. Additionally, prices have been heating up in some markets, particularly in Calgary and Toronto where single family properties remain in short supply.