Friday, November 15, 2013 Posted by Real Estate Snatch
In its most recent interest rate announcement and its October 2013 Monetary Policy Report, the Bank of Canada presented its most recent outlook for the Canadian economy and discussed how this fed through into its decision to keep its Target for the Overnight Lending Rate at one per cent.

The Bank announced that the Canadian economy was now not expected to reach full capacity until the end of 2015. The language in the report also suggested that hikes to the Target for the Overnight Lending Rate would not be in the offing. Rather, the consensus view is that the Bank will not raise its policy rate until the end of 2014 or even the beginning of 2015.

The more pessimistic view from the Bank of Canada flowed through into the bond market, thereby affecting the outlook for longer term borrowing costs. Yields on medium to long-term Government of Canada bonds trended lower and forward rates were revised. For example, the consensus outlook for the five-year Government of Canada bond, which is related to the popular five-year fixed rate mortgage, is for a moderate 25 to 50 basis point (0.25 to 0.5 percentage point) increase by the end of 2014. 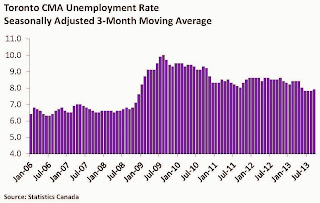 The Bank of Canada currently has a substantial amount of flexibility when it comes to setting its Target for the Overnight Lending Rate. Using its target rate as a lever, the Bank targets consumer price inflation, as measured by the Consumer Price Index (CPI), at two per cent. If the Bank feels that there is a risk that the annual rate of inflation will move above two per cent for a sustained period of time, it may hike the target rate to slow consumer spending thereby taking pressure off prices. If the opposite is true, the Bank may lower interest rates to stimulate spending. 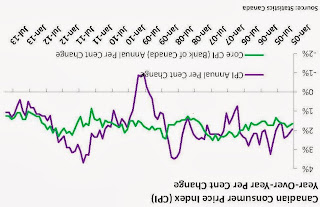 While it is true that the inflation rate has been closer to one per cent (and sometimes below this mark), the Bank has chosen not to lower their Target Rate in an effort to coax CPI growth back to two per cent. This is because there is also a concern over the level of household indebtedness in Canada and the argument that even lower rates would simply add to this concern.

The unemployment rate for the Greater Toronto Area is sitting at the 20-year average and well below the recessionary peak set in 2009. This points to relatively balanced labor market conditions, under which we should expect growth in wages and salaries to be at the rate of inflation over the next year. Given that there remains considerable slack in the Canadian economy, it will still be some time before the unemployment rate recedes to the 6.5 to 7.0 per cent mark we experienced in the years preceding the recession and we experience sustained income growth above the rate of inflation.

Home Ownership Will Remain Affordable in the GTA

With mortgage rates remaining low through 2014 and incomes set to grow by the rate of inflation, home ownership will remain affordable in the Greater Toronto Area, even with average home price growth in the mid-single-digits through the end of next year. The share of the average gross (before tax) household income dedicated to mortgage principal and interest, property tax and utilities associated with the purchase of an average-priced home will remain well below the 39 per cent ceiling set out in the stricter mortgage lending guidelines enacted by the Federal Government in July 2012.
Source: Toronto Real Estate Board (TREB)