The number of home sales processed through the MLS® Systems of Canadian real estate Boards and Associations and other co-operative listing systems fell 3.2 per cent on a month-over-month basis in October 2013. The decline returned activity back to near where it stood last June and July.
“October’s lower activity provides early evidence confirming that sales in the later summer and early fall were boosted by homebuyers with pre-approved mortgages at lower than current interest rates jumping into the market before their preapprovals expired,” said Gregory Klump, CREA’s Chief Economist. “Now that interest rates appear to be going nowhere fast, sales activity in the near term may be held in check by homebuyers who are in less of a hurry to purchase.

While the Finance Minister will no doubt continue to keep a close eye on Canadian housing markets for signs of overheating as interest rates remain low, October sales results may provide him with reassurance that tightened mortgage regulations and lending guidelines are working as intended.”

Sales were down in a little over half of all local markets, including Greater Vancouver, the Fraser Valley, Greater Toronto, Hamilton-Burlington, and Montreal. The monthly decline in activity among these markets offset increased activity in a handful of less active major urban centres. 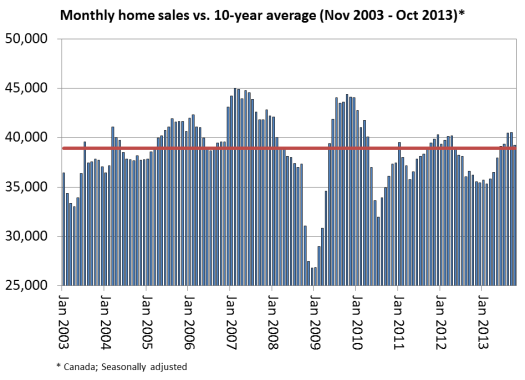 October’s seasonally adjusted sales figure stood slightly above (0.9 per cent) the average for monthly sales over the past 10 years.

Actual (not seasonally adjusted) activity posted an 8.3 per cent year-over-year gain in October. Sales were up on a year-over-year basis in just over half of all local markets, once again led by gains in Greater Vancouver, Calgary, Edmonton, and Greater Toronto.
On an actual (not seasonally adjusted) basis, a total of 402,299 homes have traded hands across the country so far this year. That stands just 0.2 per cent below levels recorded in the first 10 months of 2012.


Despite considerable monthly sales volatility in recent years, annual sales remain remarkably stable. With just two lower volume months left to go this year, sales for the year-to-date in October stand broadly in line with activity over the same period in each of the past five years and well off the peak reached in 2007. 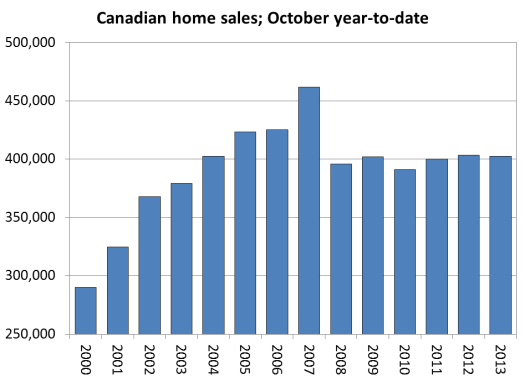 The number of newly listed homes declined by 0.8 per cent on a month-over-month basis in October, with a fairly even split between the number of markets where new supply fell and the number where it remained stable or increased.
With the monthly decline in sales having outstripped the dip in new listings, the national sales-to-new listings ratio fell to 54.6 per cent in October compared to 55.9 per cent in September. This remains well within balanced market territory, which has been the case since early 2010.
Based on a sales-to-new listings ratio of between 40 to 60 per cent, about two thirds of all local markets were in balanced market territory in October.

“A majority of local markets across the country are still seeing a healthy balance between buyers and sellers coupled with modest price growth,” said CREA President Laura Leyser. “Even so, there are some markets in the Prairies and in parts of southwestern Ontario where competition among buyers has increased, while parts of Quebec and some areas in the Maritimes have been seeing increasing competition among sellers. Because all real estate is local, your REALTOR® remains your best resource for understanding how the housing market is shaping up where you live or might like to.”
The number of months of inventory is another important measure of balance between housing supply and demand. It represents the number of months it would take to completely liquidate current inventories at the current rate of sales activity.

There were 6.0 months of inventory at the national level at the end of October, up from 5.9 months one month earlier, which was the first increase since February. However, as with the sales-to-new listings ratio, the current level for months of inventory indicates that the Canadian housing market remains well balanced. 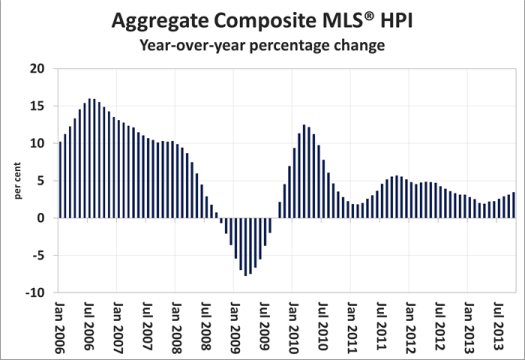 The Aggregate Composite MLS® HPI rose 3.52 per cent compared to October 2012. Year-over-year price growth picked up among all property types tracked by the index, led by one-storey single family homes (+4.19 per cent). This was followed by two-storey single family homes (+3.88 per cent), townhouse/row units (+3.28 per cent) and apartment units (+2.05 per cent).
Year-over-year price growth in the MLS® HPI was mixed across housing markets tracked by the index, led by Calgary (+8.17 per cent) and Greater Toronto (+4.54 per cent). Although the prices remained below year-ago levels in Greater Vancouver, Victoria, Vancouver Island, and Regina, October marked the smallest year-over-year decline in 2013.

PLEASE NOTE: The information contained in this news release combines both major market and national sales information from MLS® Systems from the previous month.


Further Information:  Can be found at CREA

Have something to share with us?
E-mail us at scoop@realestatesnatch.com