•National home sales edged up 0.2% from June to July.
•Actual (not seasonally adjusted) activity came in 9.4% above levels in July 2012.
•The number of newly listed homes edged down 0.4% from June to July.
•The Canadian housing market has tightened but remains in balanced territory.
•The national average sale price rose 8.4% on a year-over-year basis in July.
•The MLS® Home Price Index (HPI) rose 2.7% year-over-year in July. 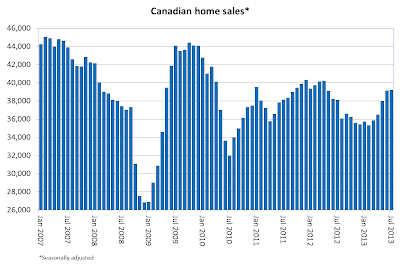 Boards and Associations and other cooperative listing systems in Canada was little changed on a month-over-month basis in July 2013. Sales edged up just two-tenths of a percentage point to hold below levels reached prior to tightened mortgage regulations last year.

The number of local markets where sales improved on a month-over-month basis ran roughly even with those where activity edged back in July. Outsized gains in Greater Toronto and Greater Vancouver tipped the balance, resulting in a small increase at the national level.

“Resale housing activity was mixed in July, with some local markets continuing to improve and others dialing back some of their recent gains,” said CREA President Laura Leyser. “Among major markets where sales declined in July, activity is still higher than it was at the start the year. That said, prospects going forward will really depend on where you are and your local REALTOR® remains the best resource for understanding the housing market where you live or might like to.” 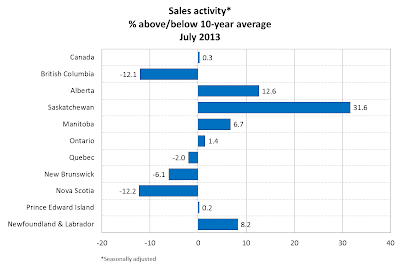 wake of tightened mortgage rules and lending guidelines last year, but the numbers for July suggest that national activity is levelling off at what might best be described as average levels,” said Gregory Klump, CREA’s Chief Economist. “Sales dropped sharply in August last year, so we may see some year-over-year increases in sales and average prices next month that would reflect weakness in the rear view mirror.”

Actual (not seasonally adjusted) activity came in 9.4 per cent ahead of levels reported in July 2012. Sales were up on a year-over-year basis in three of every five local markets, led by double-digit gains in Greater Vancouver, Calgary, Edmonton, and Greater Toronto. In Greater Toronto and Greater Vancouver, increases reflect sales trends that were already weakening at this time last year.

Some 284,865 homes have traded hands across the country so far this year. That stands 4.6 per cent below levels in the first seven months of 2012.

The number of newly listed homes edged down 0.4 per cent on a month-over-month basis in July. As with sales activity, the number of local markets where new supply increased was equal to those where it declined. However, due to its size, the decline in new listings in Greater Toronto tipped the balance slightly negative at the national level.

With both sales activity and new listings little changed in July, the national sales-to-new listings ratio was 54 per cent. This remains roughly on par with June’s reading of 53.7 per cent. While the national housing market has tightened slightly in recent months, it remains firmly rooted in balanced market territory where it has been since early 2010.

5 of the cheapest places in Canada to buy a home

GTA REALTORS® Release Monthly Resale Housing Figures for July 2013 total sales were up by 16 per cent compared to July 2012. [Video]
Based on a sales-to-new listings ratio of between 40 to 60 per cent, two-thirds of all local markets were in balanced market territory in July.

The actual (not seasonally adjusted) national average price for homes sold in July 2013 was $382,373, an increase of 8.4 per cent from the same month last year.

“Sales activity in some of Canada’s larger and more expensive markets was softening and pulling down the national average home price at this time last year,” said Klump. “The recent improvement of activity in these markets contributed to the national average price gain in July. If Greater Toronto and Greater Vancouver are removed from national average price calculations, the increase is cut almost by half. A better gauge of what’s going on with prices is the MLS® Home Price Index, which is not affected by changes in the mix of sales the way that the average price is. The index shows year-over-year price growth stabilizing between two and three per cent.” 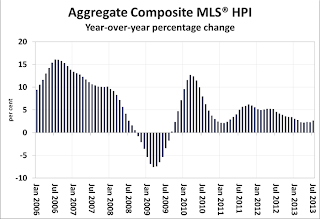 The Aggregate Composite MLS® HPI rose 2.7 per cent compared to July 2012. Year-over-year
growth in the price index has slowed since late 2011 and has held steady between two and three per cent for the past six months.

Year-over-year price growth in the MLS® HPI was mixed across the markets tracked by the index.

PLEASE NOTE: The information contained in this news release combines both major market and national sales information from MLS® Systems from the previous month.