Friday, February 15, 2013 Posted by Real Estate Snatch
According to statistics released today by The Canadian Real Estate Association (CREA), national home sales activity edged up on a month-over-month basis in January 2013. National sales activity has held fairly steady after gearing down last August in the wake of tightened mortgage lending rules.
Highlights:
The number of home sales processed through the MLS® Systems of real estate Boards and Associations and other cooperative listing systems in Canada edged up 1.3 per cent on a month-over-month basis in January 2013. This marks the fifth month in a row that national sales activity has shown little change from levels in the previous month.

Home sales picked up in about half of all local markets in January from the previous month, including some of Canada's most active. Greater Toronto and Greater Vancouver posted monthly sales increases of 5.6 per cent and 4.7 per cent respectively, while sales in Edmonton climbed by nearly 10 per cent on the month. Activity gains there were partially offset by softer sales in Ottawa, the Fraser Valley, Montreal, Regina, London and St. Thomas, and Calgary.

"There is little new to report about national sales activity, which continues to hold fairly steady at the lower levels first reached when mortgage rules were tightened in mid-2012," said CREA President Wayne Moen. "That said, things are becoming more interesting among local markets, with improving sales in Vancouver and Toronto likely to come as something of a surprise to some. As always, all real estate is local, so buyers and sellers should speak to their REALTOR® to understand how the housing market is shaping up where they live or are considering to live."

Actual (not seasonally adjusted) activity came in 5.2 per cent below levels reported in January 2012. About two-thirds of local markets posted year-over-year declines in sales activity in January. Notable exceptions include Calgary, Edmonton, Winnipeg, Windsor-Essex, and Guelph.

"Year-over-year declines in activity have received attention lately, and understandably so since they're more exciting compared to the fairly steady month-over-month trend for national sales following changes made last year to mortgage regulations and lending guidelines," said Gregory Klump, CREA's Chief Economist. "If national sales activity remains stable near the levels we've been seeing since last August, then year-over-year comparisons will begin fading after the crucial spring buying season. Until then, the focus may remain on how sales were stronger in the first half of last year compared to lower but stable national activity since then."

The number of newly listed homes rose 1.6 per cent month-over-month in January, their first monthly increase since last September.

New listings rose in a number of Canada's most active markets, led by Greater Toronto. The monthly increase there reversed a decline of similar magnitude one month earlier. New listings also rose in Greater Vancouver, Montreal, the Fraser Valley, and Vancouver Island, which also marked a reversal in a declining trend for new listings in the final months of 2012.

The number of months of inventory is another important measure of balance between housing supply and demand. It represents the number of months it would take to sell current inventories at the current rate of sales activity, and it too was little changed in January. 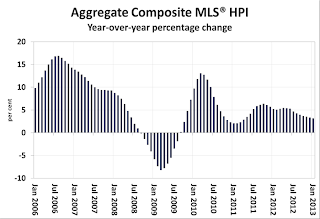 Unlike average price, the MLS® Home Price Index (MLS® HPI) is not affected by changes in the mix of sales, so it provides the best gauge of Canadian home price trends.

The Aggregate Composite MLS® HPI rose 3.1 per cent on a year-over-year basis in January. This marks the ninth time in as many months that the year-over-year gain shrank and the slowest rate of increase since April 2011.

By contrast, the MLS® HPI saw year-on-year growth accelerate in Calgary (+8.0%) and the Fraser Valley (+0.7%). In Greater Vancouver, the MLS® HPI posted a 2.8 per cent year-over-year decline in January.

MLS® is a co-operative marketing system used only by Canada's real estate Boards to ensure maximum exposure of properties listed for sale.