When CREA’s resale housing forecast was published in September, activity showed the first signs of slowing in the wake of new mortgage lending regulations. Demand has remained at lower levels, and this trend is expected to persist through the end of the year. Lower than projected third quarter sales have downgraded the prospects for activity this year in almost every province.

Sales activity is expected to be less volatile next year than it was in 2012. In 2013, CREA forecasts that national sales activity will recede by two per cent to 447,400 units. This is a slightly lower level of activity than previously forecast, reflecting the ongoing impact of new mortgage rules into next year. The continuation of moderate economic, job, and income growth will temper the impact of recent mortgage rule changes, which are not expected to dampen activity much more than has already been felt until interest rates are expected to begin rising in late 2013.

“All real estate is local, so housing market prospects can and do differ among regions and communities,” said Wayne Moen, CREA President. “For that reason, buyers and sellers should talk to their REALTOR® about the housing market outlook where they live or would like to live.”

“Annual sales in 2012 reflect a stronger profile prior to recent mortgage rule changes followed by weaker activity following their implementation,” said Gregory Klump, CREA’s Chief Economist. “By contrast, forecast sales in 2013 reflect an improvement from levels this summer in the immediate wake of mortgage rule changes. Even so, sales in most provinces next year are expected to remain down from levels posted prior to the most recent changes to mortgage regulations,” said Klump.
Despite the small downward revisions to the forecast for national sales in 2012 and 2013, activity is still expected to remain within short reach of the 10-year average (2002 – 2011).

National sales activity over the first five years of the past decade compared to the most recent five years represent two very different periods. Most of the national average price growth in the 2002-2007 period was realized amid sustained sellers’ market conditions in most large urban housing markets. Most provincial housing markets are currently balanced, and are expected to remain or return to balanced market territory for 2013.

The national average home price is projected to rise by 0.3 per cent to $363,900 in 2012, with gains in excess of that in most provinces. The smaller gain in average price nationally as compared to most provinces largely reflects a decline in sales activity among more expensive housing markets compared to 2011, particularly in British Columbia and more recently in Ontario.

The national average price is forecast to edge up another three tenths of one per cent to $365,100 in 2013, with British Columbia, Ontario, and New Brunswick registering small price declines and modest average price gains in line with or below inflation in other provinces. 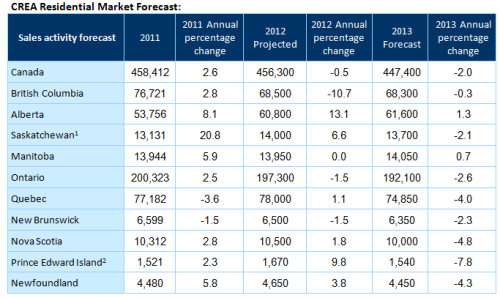 That is very good comment you shared.Thank you so much that for you shared those things with us.I am wishing you to carry on with ur achievements.All the best