According to statistics released today by The Canadian Real Estate Association (CREA), national resale housing activity remained stable from June to July 2012. Prices are off their recent peaks in Greater Vancouver and Greater Toronto, but remain above year
-ago levels in most markets.

Highlights:
Sales over MLS® Systems of Canadian real estate Boards and Associations held steady in July 2012 from the previous month, edging back by less than one-tenth of a percentage point.
The number of local housing markets was roughly evenly split between those that saw month-over-month gains and those that posted monthly declines. Activity was up from the previous month in Kingston, Chilliwack, and Calgary, offset by fewer sales in Toronto, Newfoundland & Labrador, and Edmonton.

Actual (not seasonally adjusted) activity was up 3.3 per cent year-over-year in July 2012, with gains in Calgary and slower sales in Vancouver.

“Recent changes to mortgage regulations were widely expected to temper sales and prices in Greater Toronto and Greater Vancouver, and the data released today confirms that,” said Wayne Moen, CREA President. “Even so, sales and price trends can be very different from one market to the next, and run counter to national trends. Buyers and sellers should talk to their REALTOR® to understand how the housing market is shaping up in their area.”

“Some first-time home buyers may have difficulty qualifying for mortgage financing due to shortened amortization periods included in recent changes to mortgage regulations,” said Gregory Klump, CREA’s Chief Economist “As the lynchpin of the housing market, lower first-time buying activity will have knock-on effects over the rest of the market. It will likely take more time for move-up buyers to sell their current home.”

The number of newly listed homes fell 3.3 per cent in July compared to June, with declines in more than half of all local markets including Montreal, Toronto, Vancouver, the Fraser Valley, Calgary, and Edmonton. 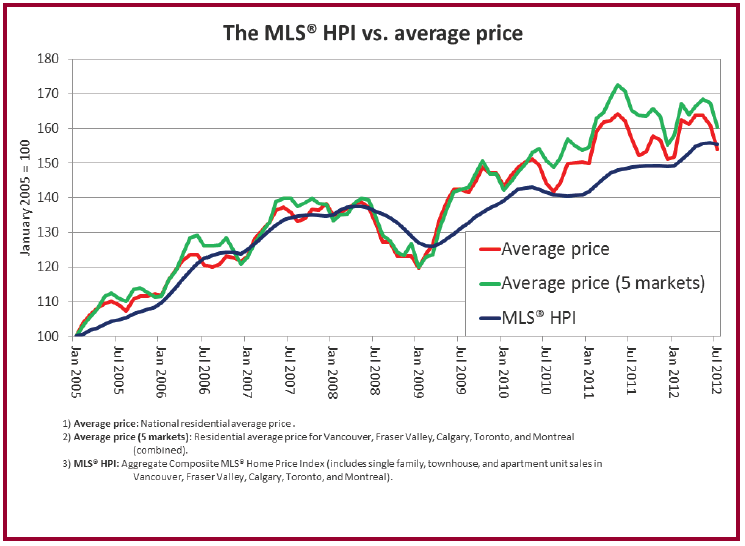 The national housing market remains firmly entrenched in balanced market territory, supported by stable sales activity and fewer new listings. The national sales-to-new listings ratio, a measure of market balance, stood at 53.4 per cent in July 2012, up from 51.6 per cent in June. Based on a sales-to-new listings ratio of between 40 to 60 per cent, two thirds of all local housing markets were in balanced market territory in July.

Unlike average price, the MLS® Home Price Index (MLS® HPI) is not affected by changes in the mix of sales, so it provides a better gauge of Canadian home price trends. The index tracks home price trends in five of Canada’s most active housing markets, including Greater Vancouver, the Fraser Valley, Calgary, Greater Toronto, and Montreal. These five markets comprise approximately 45 per cent of all home sales activity in Canada.

The MLS® HPI posted the largest year-over-year increase in Greater Toronto (7.1%), followed by Calgary (6.0%), the Fraser Valley (2.5%), Montreal (2.1%), and Greater Vancouver (0.6%). Price gains in July were smaller than they were the previous month in all of these markets except Calgary.


Learn more about the Canadian housing market in this SlideShare presentation: