seasonally adjusted sales activity posted monthly gains in more than half of all local Canadian markets in January. National sales activity has improved steadily since last summer, and now stands almost 25 per cent above the low point reached in July 2010. 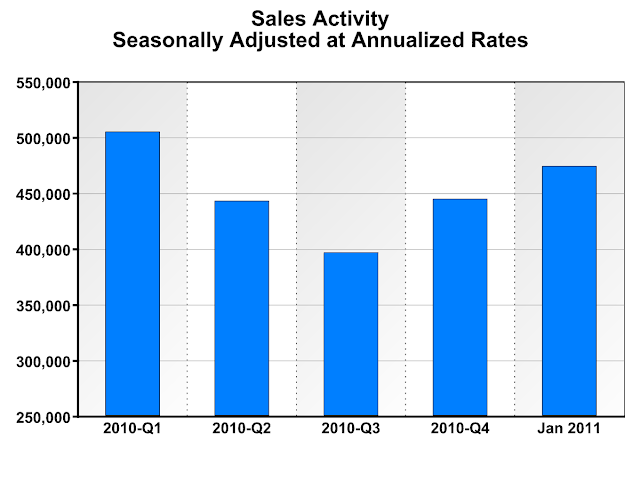 We anticipated the recent announcement of tighter mortgage regulations, which will come into effect this March, would pull forward sales activity into the first quarter of 2011, particularly in some of Canada’s more expensive housing markets,” said Gregory Klump, CREA’s Chief Economist. “The sharp rise in sales activity in Toronto following the announcement provides early evidence confirming this,” said Klump.

It will take some time before the longer term impact of the latest mortgage regulations on the housing market can be known,” said Georges Pahud, CREA’s President. “For that reason, further action shouldn’t be taken until the impact can be measured. In the meantime, if last year can be used as any guide, sales activity may heat up further as we get closer to the date on which tighter mortgage regulations come into effect, especially in some of Canada’s pricier markets. That said, local housing market trends often diverge from national trends, so buyers and sellers should consult their local REALTOR® to understand how the market is shaping up where they live.”

Actual (not seasonally adjusted) national sales activity via the Multiple Listing Service® (MLS®) Systems of Canadian real estate Boards came in 6.6 per cent below levels in January 2010. This was the smallest year-over-year decline since May 2010.

Sales activity has been on the rise and prices have been stable since last autumn, so CREA had been expecting potential sellers who shied away from the market last summer to begin listing their properties in early 2011. Because sales activity and new supply rose in tandem in January, the national resale housing market remained balanced. The national sales-to-new listings ratio, a measure of market balance, stood at 55.7 per cent in January 2011, which is little changed from the previous two months. Just over half of local markets in Canada were in balanced market territory in January.

Much of the year-over-year gain in January 2011 resulted from a jump in the number of multi-million dollar home sales in  a couple of areas in Greater Vancouver, the effects of which were amplified at the local, provincial, and national levels by the fact that actual monthly volumes for sales activity are low in January compared to other months.


PLEASE NOTE: The information contained in this news release combines both major market and national MLS® sales information from the previous month.

CREA cautions that average price information can be useful in establishing trends over time, but does not indicate actual prices in centres comprised of widely divergent neighborhoods or account for price differential between geographic areas. Statistical information contained in this report includes all housing types.
MLS® is a co-operative marketing system used only by Canada’s real estate Boards to ensure maximum exposure of properties listed for sale.