“Demand for condominium apartments remained strong in the fourth quarter of 2014. While the supply of condominium apartments listed for sale grew in the fourth quarter, including a large number of newly completed units, the number of sales grew at a faster pace. Competition between buyers increased in the condo market over the past year,” said Mr. Etherington.

“Interest in ownership housing in the GTA, including demand from first-time buyers in the condo market, is extremely strong. The majority of households understand that a home purchase represents a quality long-term investment,” said Mr. Etherington. 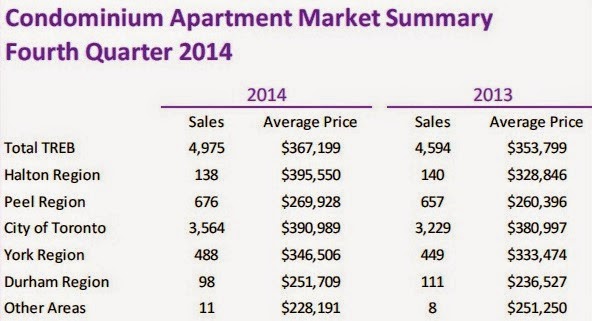 “Despite very strong condominium apartment completions over the last two years, we have not experienced a glut in inventory. The number of buyers has more than kept up with the number of units available for sale. This is why we continued to experience above-inflation average price growth in the condo segment,” said Jason Mercer, TREB’s Director of Market Analysis.