This result was down by five per cent compared to the fourth quarter of 2013. The amount of space leased was down for the industrial and commercial/retail segments
and up for the office segment.

“The third quarter result for Canadian Gross Domestic Product represented relatively strong economic growth and included an increase in exports, which is a positive for many businesses operating in south central Ontario. Notwithstanding the stock market turmoil experienced during the fourth quarter of 2014, it is quite possible that the lower value of the Canadian dollar could prompt further demand for Canadian exports. This could lead some GTA firms to step up their search for new space as the demand for their goods and/or services increases,” said Mr. Etherington.

Total commercial sales in the fourth quarter, at 243, were down in comparison to the same period last year, when 336 properties were reported sold. While the number of transactions were down, average selling prices on a per square foot basis (where pricing was disclosed) were up for industrial and office properties, and down only slightly for commercial/retail properties.

“Looking forward through 2015, the Greater Toronto Area continues to be a global region with a diversified economy and a high quality of life. These attributes will continue to put the Toronto area in good stead, as it relates to attracting businesses and new comers from around the world,” continued Mr. Etherington. 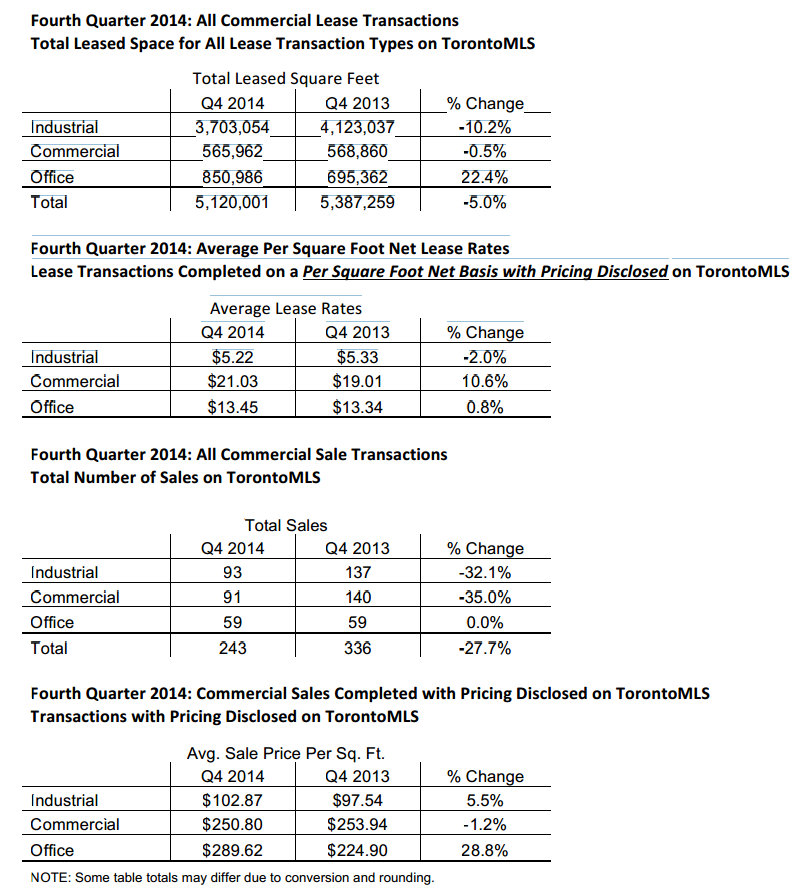 
Click Here For information about Buyer Representation Agreements (BRA)
Greater Toronto REALTOR'S® are passionate about their work. They adhere to a strict Code of Ethics and share a state-of-the-art Multiple Listing Service. Serving over 39,000 Members in the Greater Toronto Area, the Toronto Real Estate Board is Canada’s largest real estate board.
Greater Toronto Area Open House Listings Are Available on www.realestatesnatch.com
Have something to share with us?
E-mail us at scoop@realestatesnatch.com
Read more from Real Estate Snatch Post blog: