Toronto Real Estate Board announced that Greater Toronto REALTORS® reported 3,350 sales through the TorontoMLS system during the first 14 days of November 2014. Compared to the same period in 2013, this result represented an increase of 8.3 per cent. Over the same period, new listings were also up, but by a lesser 2.2 per cent.

“Both first-time buyers and existing homeowners who decided to change their housing situation continued to make deals on ownership housing across the GTA in the first half of November. This points to the fact that home ownership remains affordable and that buyers remain confident in ownership housing as a quality long-term investment,” said Mr. Etherington.

The average selling price for sales during the first two weeks of November was $579,834, which was up by 7.6 per cent compared to the average of $538,755 reported for the same time frame in 2013. The detached market segment led the way in terms of year-over-year price growth, both in the City of Toronto and surrounding regions.

“Sellers’ market conditions continued to be experienced for low-rise home types during the first 14 days of November. In many neighbourhoods across the GTA, there are a number of buyers competing for a constrained supply of singles, semis and townhouses. This is why, more often than not, annual average rates of price growth for these home types have been in the high single digits or low double digits this year,” said Jason Mercer, TREB’s Director of Market Analysis. 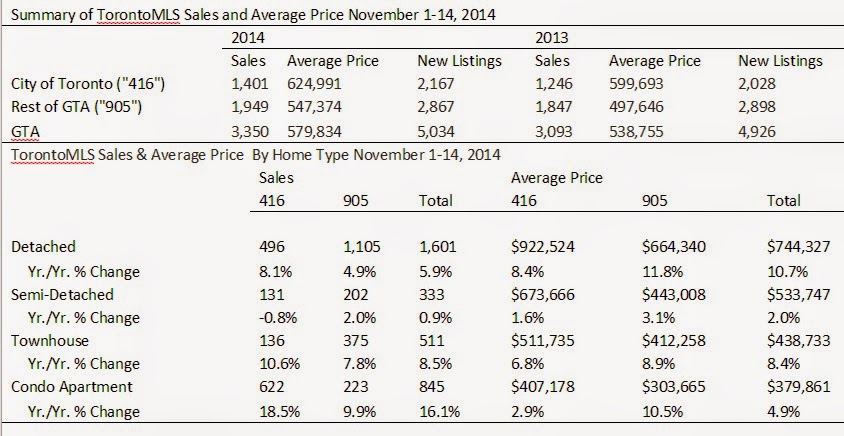 The Market According to TREB's Mercer - Quarterly October 2014

Jason Mercer - Director, Market Analysis, discusses the Market for the Quarterly of October 2014