Toronto Real Estate Board President Paul Etherington reported 7,600 sales through the TorontoMLS system in August 2014. This result was up by 2.8 per cent compared to 7,391 transactions reported in August 2013. Year-to-date sales through the end of August amounted to 65,454, which represented an increase of 6.5 per cent compared to the same period in 2013.

“The last full month of summer ended on a high note. As we look toward the fall market, I expect that demand for ownership housing will remain strong. Home buyers will continue to benefit from a diversity of affordable home ownership opportunities throughout the GTA. The fact that sales were up for all major home types in August suggests that first-time buyers and existing home owners remain very active in today’s marketplace,” said Mr. Etherington.

“The number of listings in August was down in comparison to last year, while the number of sales increased. This means that sellers’ market conditions remained in place with a lot of competition between buyers. This is why we continued to see strong price growth last month. Looking forward, if sales growth continues to outstrip listings growth, the average selling price should continue to increase on a year-over-year basis,” said Jason Mercer, TREB’s Director of Market Analysis 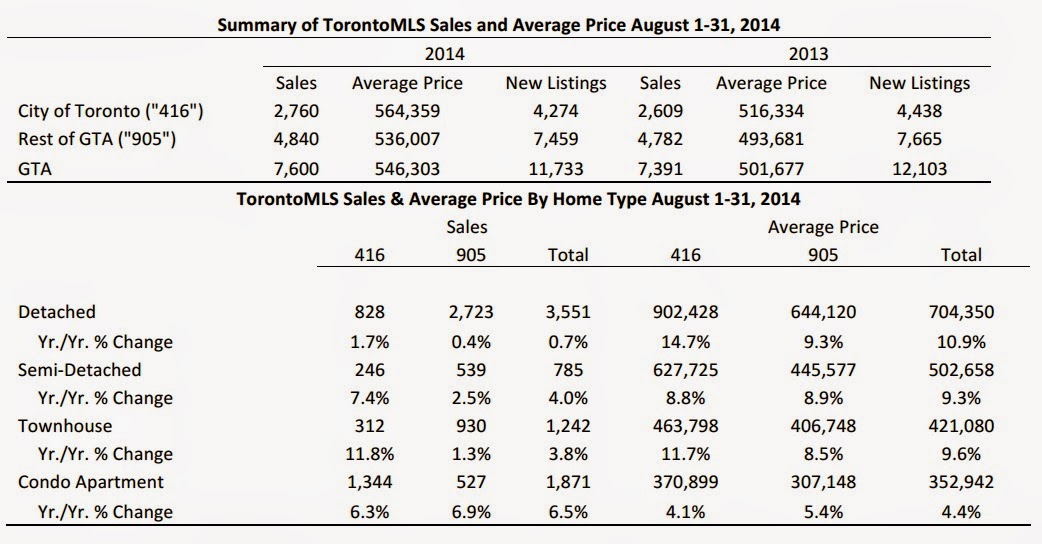 Greater Toronto REALTOR'S® are passionate about their work. They adhere to a strict Code of Ethics and share a state-of-the-art Multiple Listing Service. Serving over 39,000 Members in the Greater Toronto Area, the Toronto Real Estate Board is Canada’s largest real estate board.