Which Of Your Facebook Friends Is Most Similar To You?


Five (www.five.com), a consumer technology company developing a mobile app for private social experiences, has launched a web tool called Five Labs (labs.five.com) that predicts users’ personalities based on their Facebook posts. The tool was built as a demonstration of how today’s public social networks can analyze user content.

Five Labs examines the linguistic content of Facebook wall posts, pulling key words to make strikingly accurate predictions about individual personalities. Users can compare themselves to their friends’ as well as public figures such as Marissa Mayer, CEO of
Yahoo, and Mark Cuban, owner of the Dallas Mavericks.

Five Labs utilizes an artificial intelligence method designed by H. Andrew Schwartz—a lead researcher at the University of Pennsylvania’s Worldwide Well-Being Project. An advisor to Five, Mr. Schwartz’s research on language and personality was published in
the Public Library of Science (PLOS) in September 2013.

The application’s predictions are based around the Big Five personality traits: the leading personality theory in modern psychology. According to the theory, personality is based on the following five characteristics: extraversion, openness, neuroticism,
conscientiousness, and agreeableness.

Five’s co-founder Nikita Bier notes that the application is meant to hold a mirror to the growing trend of social applications mining data from user content. In a bid to capitalize off of its immense stores of social data, Facebook has recently founded a research
laboratory in New York City. Similarly, Google has acquired an artificial intelligence
company Deep Mind this past January.

According to Mark Zuckerberg, "The goal [of the Facebook research lab] is…to understand how everything on Facebook is connected by understanding what the posts that people write mean.” In other words, the lab will focus on extracting as much salient, psychological meaning as it can from user content.
Although Five Labs employs similar techniques, there is a key difference between their work and others’: Five Labs never stores the information. Once a personality profile is created, the user’s private content is discarded.

“Think of this as a personality snapshot,” suggests co-founder Nikita Bier. “It’s all for fun,” he adds, “but we’re also hoping to educate. People need to ask themselves a profound question: ‘how does my data portray me on public networks—and how might
that be used?’”

See your personality at labs.five.com  and sign up for the upcoming mobile app at
five.com.


Check out the app > 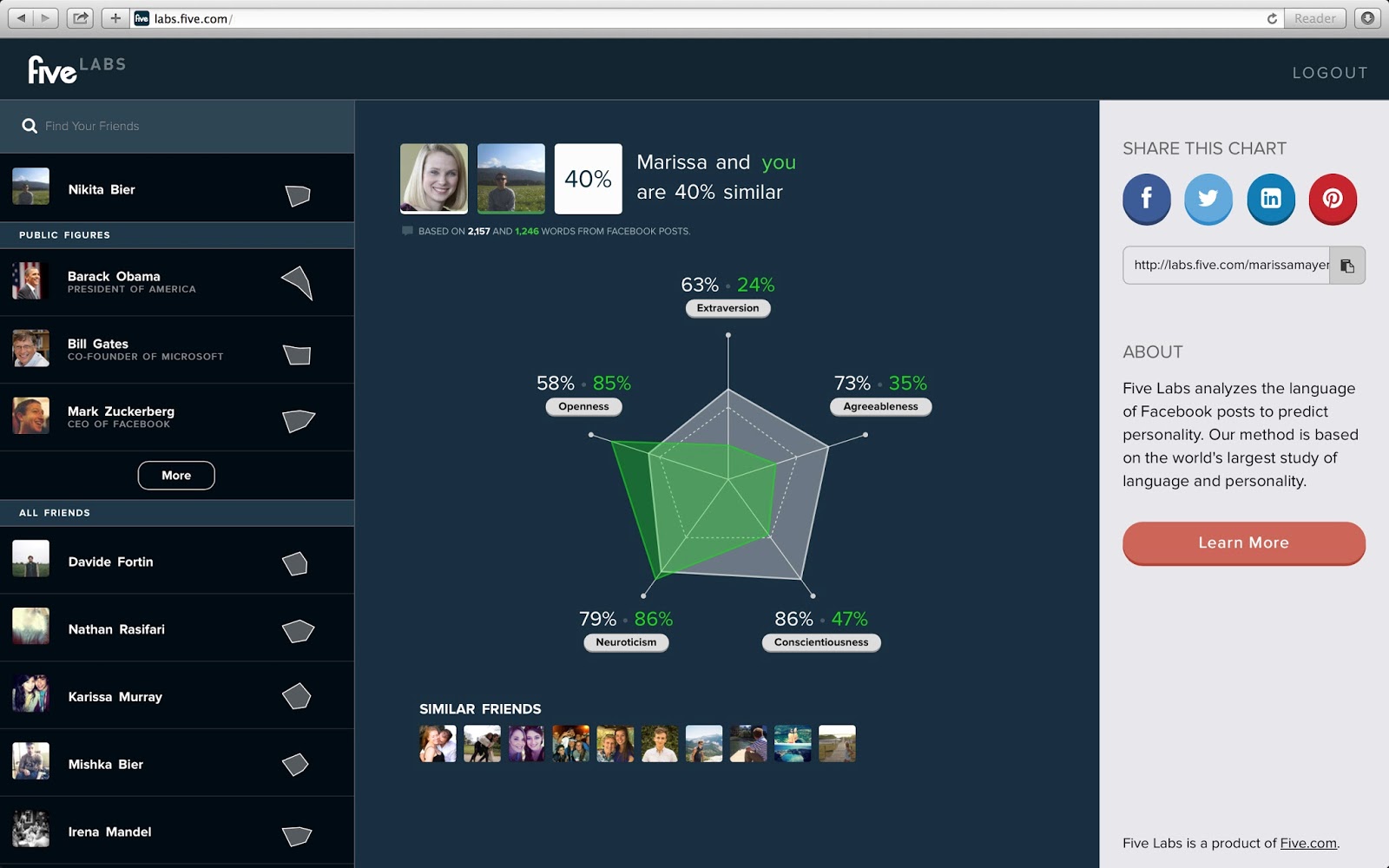 About Five
Based in Berkeley, California, Five is a consumer technology company developing a mobile application focused on private social experiences, set to launch in Fall 2014. The company was founded by CEO Nikita Bier and CTO Erik Hazzard, who previously cofounded Outline—a startup that developed data visualization apps for government agencies.