According to statistics released today by The Canadian Real Estate Association (CREA), national home sales activity was little changed in February 2014 on a month-over-month basis.

The number of home sales processed through the MLS® Systems of Canadian real estate Boards and Associations was little changed from January to February 2014, edging up just three tenths of one per cent. The February result follows five straight monthly declines and leaves activity 9.3 per cent below the peak reached in August 2013 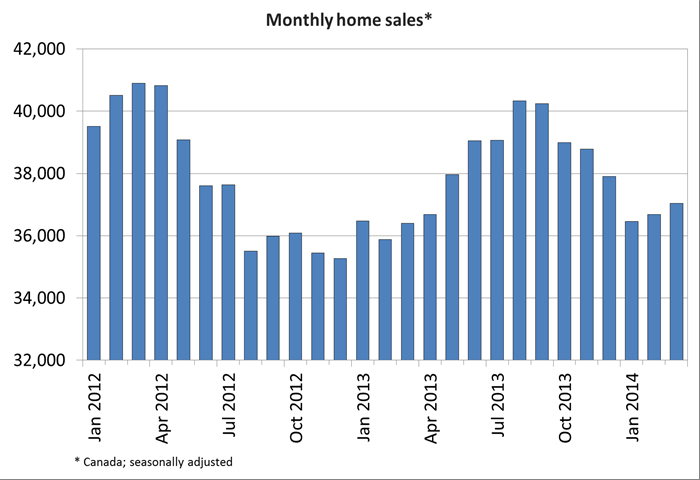 "Sales in February rebounded in some of the smaller local markets where activity was impacted by harsh winter weather in January," said CREA President Laura Leyser. "The strength of sales activity during the crucial spring market period will be influenced by the availability of listings, which varies considerably from market to market. To best understand how the balance between available listings and demand is shaping up this spring where you live or might like to, your best bet is to talk to your local REALTOR®."

Actual (not seasonally adjusted) activity stood 1.9 per cent above levels posted in February 2013. Most of the year-over-year gain reflects increased sales activity in outline: British Columbia's Lower Mainland and to a lesser extent in Calgary

"Sales activity this spring will be supported by the recent decline in the benchmark five-year conventional mortgage rate," said Gregory Klump, CREA's Chief Economist. "That's because buyers needing mortgage default insurance who opt for a term of less than five years must qualify for mortgage financing based on that rate, and not a discounted rate that their lender may be offering. The support will be of particular importance in some of Canada's larger urban markets where home prices are higher than those in smaller markets." 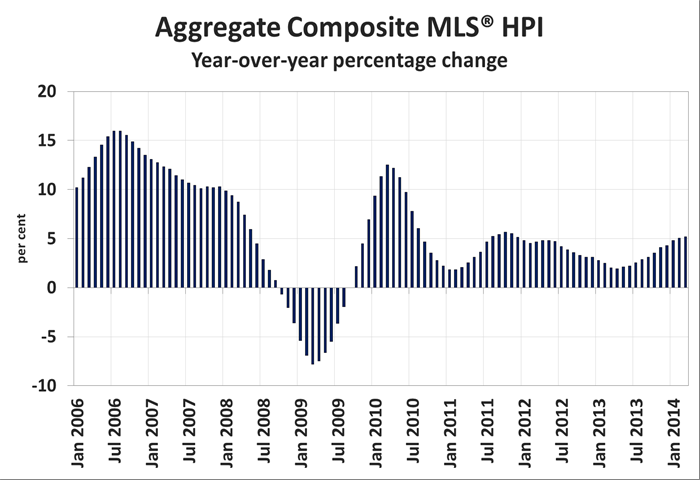 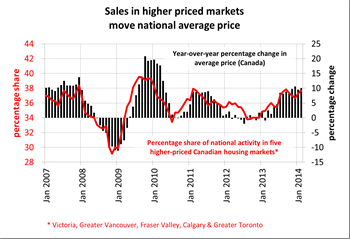 There were 6.4 months of inventory at the national level at the end of February 2014, down slightly from 6.5 months at the end of January. As with the sales-to-new listings ratio, the months of inventory measure continues to point to a well-balanced housing market at the national level.
The actual (not seasonally adjusted) national average price for homes sold in February 2014 was $406,372, an increase of 10.1 per cent from the same month last year.

The size of year-over-year average price gains continues to reflect the decline in sales activity in February of last year among some of February 2014, up from a 4.83 per cent gain in January. Year-over-year price growth picked up among all property types tracked by the index.


Year-over-year price gains were led by two-storey single family homes (+5.84 per cent) and one-storey single family homes (+5.40 per cent). This was closely followed by price increases for townhouse/row units (+4.05 per cent) and apartment units (+3.74 per cent).
Year-over-year price growth in the MLS® HPI varied among housing markets tracked by the index, with the biggest gains again having been posted by Calgary (+9.10 per cent) and Greater Toronto (+7.28 per cent).
Greater Vancouver's MLS® HPI recorded a fourth consecutive year-over-year increase (+3.17 per cent). While prices inVictoria remained lower than year-ago levels, February's decline (-1.01 per cent) was the smallest in more than three years.
SOURCE: Canadian Real Estate Association (CREA)


PLEASE NOTE:
The information contained in this news release combines both major market and national MLS® sales information from the previous month.
CREA cautions that average price information can be useful in establishing trends over time, but does not indicate actual prices in centres comprised of widely divergent neighborhoods or account for price differential between geographic areas. Statistical information contained in this report includes all housing types.
MLS® is a co-operative marketing system used only by Canada’s real estate Boards to ensure maximum exposure of properties listed for sale.
The Canadian Real Estate Association (CREA) is one of Canada’s largest single-industry trade associations, representing more than 111,000 REALTORS® working through some 90 real estate Boards and Associations.
The information contained in this report has been prepared by The Canadian Real Estate Association drawn from sources deemed to be reliable, but the accuracy and completeness of the information is not guaranteed. In providing this information, The Canadian Real Estate Association does not assume any responsibility or liability.
However,REAL ESTATE SNATCH is not liable for the use or misuse of the site's information. The information displayed on www.realestatesnath.com is for reference only.