Tuesday, December 17, 2013 Posted by Real Estate Snatch
According to statistics[1] released today by The Canadian Real Estate Association (CREA), national home sales were little changed in November compared to October.
Highlights:
The number of home sales processed through the MLS® Systems of Canadian real estate Boards and Associations and other co-operative listing systems was little changed in November 2013 compared to October, edging down by one tenth of one per cent.

National sales activity in November stood 3.4 per cent below the peak reached in September, providing further evidence that activity in the later summer and early fall was likely boosted by homebuyers with pre-approved mortgages at lower than current interest rates jumping into the market before their pre-approvals expired.

"Tightened mortgage regulations, combined with the recent increase in the five-year mortgage rate, have afected housing markets differently depending on their location," said CREA President Laura Leyser. "Because all real estate is local, your REALTOR® remains your best resource for understanding how the housing market is shaping up where you live or might like to."
Local markets where sales improved on a month-over-month basis ran roughly even with the number in which activity edged back in November, with a decline in Greater Toronto offsetting an increase in Greater Vancouver.

November's seasonally adjusted sales figure stood slightly above (0.7 per cent) butroughly in line with the average for monthly sales over the past 10 years.

Actual (not seasonally adjusted) activity was up 5.9 per cent from November 2012. Year-over-year increases were posted in about half of all local markets, led by gains in Greater Vancouver, Calgary, Edmonton, and Greater Toronto.

On an actual (not seasonally adjusted) basis, a total of 434,678 homes have traded hands across the country so far this year.

This represents an increase of 0.2 per cent compared to levels recorded in the first 1 months of 2012.

"While there has been a lot of volatility in sales activity from month to month, sales for the year to date are on par with fairly steady levels posted for the same time period in each of the past five years," said CRE Chief Economist Gregory Klump. 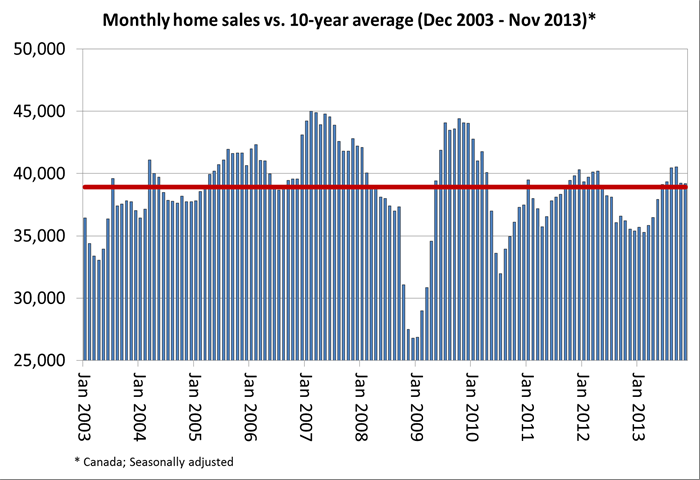 The number of newly listed homes rose 1.8 per cent on a month-over-month basis in November. New supply was up in a little over half of all local markets, with a jump in BC's Lower Mainland outstripping small declines in Greater Toronto and Ottawa.

With sales activity flat on a month-overmonth basis and new listings up, the national sales-to-new listings ratio slipped to 53.4 per cent in November compared to 54.5 per cent in October. This remains well within balanced market territory, as has been the case since early 2010.

Based on a sales-to-new listings ratio of between 40 to 60 per cent, about three out of every five local markets werein balanced market territory in November.

There were 6.0 months of inventory at the national level at the end of November, unchanged from one month earlier. As with the sales-to-new listings ratio, the current level of the months of inventory measure indicates that the Canadian housing market remains well balanced.

"Most housing markets are in balanced market territory, including in many large urban centres where sales are below peaks reached earlier this year," said Klump. "On balance, current trends provide more evidence that the Canadian housing market remains well behaved while interest rates remain low."

The actual (not seasonally adjusted) national average price for homes sold in November 2013 was $391,085, an increase of 9.8 per cent from the same month last year.

The size of year-over-year average price gains continues to reflect the decline in sales activity last year in some of Canada's larger and more expensive markets which caused the national average price to drop at that time.

Removing Greater Vancouver and Greater Toronto from national average price calculations, the year-over-year increase is more than cut in half to 4.3 per cent.

The MLS® Home Price Index (MLS® HPI) provides a better gauge of price trends, as it is not affected by changes in the mix of sales activity the way that average price is.

The Aggregate Composite MLS® HPI rose 4.11 per cent compared to November 2012. Year-over-year price growth picked up among all property types tracked by the index with the exception of townhouse/row units. (Chart C) 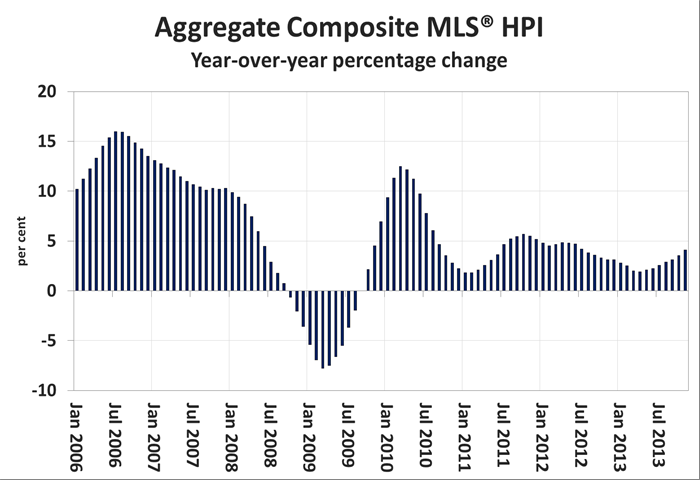 Year-over-year price growth in the MLS® HPI was mixed across housing markets tracked by the index, led by Calgary (+8.82 per cent) and Greater Toronto (+5.69 per cent). Greater Vancouver recorded the first year-over-year increase (+1.02 per cent) since prices turned lower last year.

PLEASE NOTE:
The information contained in this news release combines both major market and national MLS® sales information from the previous month.
CREA cautions that average price information can be useful in establishing trends over time, but does not indicate actual prices in centres comprised of widely divergent neighborhoods or account for price differential between geographic areas. Statistical information contained in this report includes all housing types.
MLS® is a co-operative marketing system used only by Canada’s real estate Boards to ensure maximum exposure of properties listed for sale.
The Canadian Real Estate Association (CREA) is one of Canada’s largest single-industry trade associations, representing more than 106,000 REALTORS® working through more than 100 real estate Boards and Associations.