Tuesday, October 15, 2013 Posted by Real Estate Snatch
According to statistics released today by The Canadian Real Estate Association (CREA), national home sales posted a small month-over-month increase in September 2013.
Highlights:
The number of home sales processed through the MLS® Systems of Canadian real estate Boards and Associations and other co-operative listing systems edged up a modest eight-tenths of one percent on a month-over-month basis in September 2013.
Sales improved on a month-over-month basis in just over half of all local markets, with gains in Greater Vancouver and Greater Toronto offsetting declines in Calgary and Montreal. 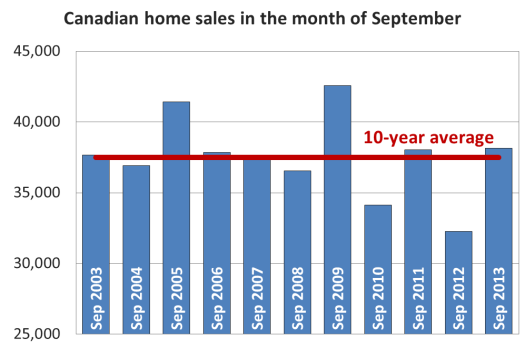 Actual (not seasonally adjusted) activity remained roughly on par with the 10-year average in September. The 18.2 per cent increase compared to year-ago levels reflects weakened activity at that time.
Sales were up on a year-over-year basis in about 75 per cent of local markets, led by gains in Greater Vancouver, Calgary, Edmonton, and Greater Toronto.

“Year-over-year increases in the sales over the past couple of months highlights how activity softened across much of the country following the introduction of tighter mortgage rules last summer,” said Gregory Klump, CREA’s Chief Economist.

“While the momentum for sales activity began improving a few months ago, it may be losing steam after having only just climbed back in line with an average of the past 10 years,” Klump added. “Even so, one can see large year-on-year changes when comparing activity to a month like September 2012, when sales dropped to the lowest level for that month in more than a decade.”
Some 340,980 homes have traded hands across the country so far this year. That stands 1.8 per cent below levels recorded in the first three quarters of 2012.

The number of newly listed homes declined by 1.4 per cent on a month-over-month basis in September. Slightly more than half of all local markets recorded declines, led by Greater Vancouver, Fraser Valley, Calgary, Greater Toronto, London & St. Thomas, Ottawa, and Montreal.
The small monthly increase in sales activity combined with a decline in new listings pushed the national sales-to-new listings ratio to 56.1 per cent in September compared to 54.8 per cent in August. While the national housing market has firmed in recent months, it remains in balanced market territory where it has been since early 2010. Based on a sales-to-new listings ratio of between 40 to 60 per cent, about three of every five local markets were in balanced market territory in September.

“Sales activity across much of the country has improved in recent months following a slow start to the year and new listings in some areas have not kept pace,” said CREA President Laura Leyser. “Depending on where they are, there may be a bit more competition among buyers for limited inventory in the months ahead. Because all real estate is local, your REALTOR® remains your best resource for understanding how the housing market is shaping up either where you live or might like to.”
The number of months of inventory is another important measure of balance between housing supply and demand. It represents the number of months it would take to completely liquidate current inventories at the current rate of sales activity. There were 5.8 months of inventory at the national level at the end of September, down from 5.9 months one month earlier. As with the sales-to-new listings ratio, the current months of inventory measure marks a slightly firmer but still well balanced national market.

If Greater Toronto, Greater Vancouver, and Calgary are removed from the national average price calculation, the year-over-year increase is 4.3 per cent. A better gauge of what’s going on with prices is the MLS® Home Price Index (MLS® HPI), which is not affected by changes in the mix of sales the way that ‘average’ price is.

This month, Victoria and Vancouver Island join the MLS® HPI. 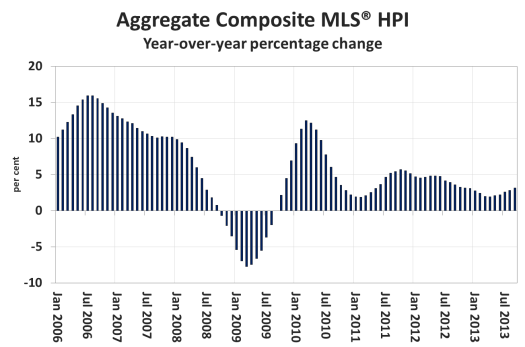 The Aggregate Composite MLS® HPI rose 3.13 per cent compared to September 2012, slightly larger than the 2.80 per cent gain in August.
Year-over-year price growth picked up among all property types tracked by the index with the exception of two-storey single family homes. That said, this property type continues to see the strongest growth, with the Benchmark two-storey single family home price up 3.56 per cent year-over-year in September.
This was followed by one-storey single family homes (+3.44 per cent), townhouse/row units (+3 per cent) and apartment units (+1.79 per cent).
Year-over-year price growth in the MLS® HPI was mixed across the markets tracked by the index.
PLEASE NOTE: The information contained in this news release combines both major market and national sales information from MLS® Systems from the previous month.