Friday, March 15, 2013 Posted by Real Estate Snatch
According to statistics released today by The Canadian Real Estate Association (CREA), national home sales activity edged back down on a month-over-month basis in February 2013 following an increase in January.
Highlights:
The number of home sales processed through the MLS® Systems of real estate Boards and Associations and other cooperative listing systems in Canada fell 2.1 per cent on a month-over-month basis in February 2013. The decline reversed the small gain recorded in January, leaving sales slightly below levels seen in recent months. National activity has generally held steady near current levels since it initially geared down in August in the wake of tighter mortgage lending rules and guidelines.

“A rebound in sales in some of Canada’s largest and most expensive markets, similar to those we saw 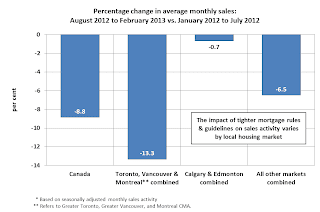 following previous mortgage rule changes, has so far remained elusive,” said CREA President Wayne Moen. “That said, the slowdown in many big markets is being offset by activity in many smaller and more affordable markets that were less impacted by last year’s mortgage rule changes. This serves as a reminder that all real estate is local. Buyers and sellers should speak to their REALTOR® to understand how the housing market is shaping up where they live or might like to.”

Actual (not seasonally adjusted) activity came in 15.8 per cent below levels reported in February 2012. Almost 80 per cent of local markets posted year-over-year declines in sales activity in February, the most notable exception being Edmonton.

“February 2012 saw an extra selling day due to the leap year. However, the year-over-year decline between this February and last year is largely a reflection of demand that is well off from 2012,” said Gregory Klump, CREA’s Chief Economist.

“The cooling off of the housing market resulted from tighter mortgage rules and guidelines coming into force in mid-July last year, with most of the decline in the sales occurring in August. Since then, sales activity has been flying at a lower altitude but has not shown much in the way of further deterioration. Until we get well into the summer months, year-over-year comparisons to months in the first half of 2012 are predictably going to be down significantly but not necessarily be indicative of further deterioration. Rather, year-over-year comparisons will continue to reflect the long shadow cast by higher sales prior to last summer’s policy tightening. Looking at the monthly trend since then shows that we’ve been seeing reasonably stable trends for demand and prices.”

The number of newly listed homes fell 1.2 per cent month-over-month in February, leaving them at their lowest level since November 2010. New listings have been trending down in tandem with a slowdown in demand. This has kept the housing market in balanced territory and held the overall number of homes for sale in check.

New listings were down in about 60 per cent of local markets in February, with the largest declines reported in Greater Toronto, Montreal, Greater Vancouver, and Saskatoon.

The number of months of inventory is another important measure of balance between housing supply and demand. It represents the number of months it would take to completely liquidate current inventories at the current rate of sales activity, and it too was little changed in February.
Nationally, there were 6.8 months of inventory at the end of February 2013, up from 6.6 months reported at the end of January.

Unlike average price, the MLS® Home Price Index (MLS® HPI) is not affected by changes in the mix of sales, so it provides the best gauge of Canadian home price trends.

The Aggregate Composite MLS® HPI rose 2.7 per cent on a year-over-year basis in February. 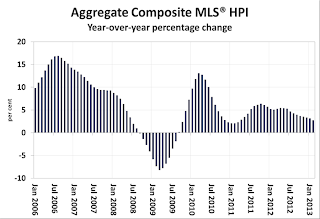 This marks the tenth time in as many months that the year-over-year gain shrank and the slowest rate of increase since March 2011.

Year-over-year price gains decelerated for one-storey single family homes (+4.2 per cent), two-storey single family homes (+2.9 per cent), and apartment units (+0.8per cent). In contrast, year-over-year price growth picked up for the fifth straight month in the townhouse/row segment (+2.4 per cent).
The MLS® HPI rose fastest in Calgary (+8.0% year-over-year), marking some of the strongest price growth that city has seen since the spring of 2010.

In Greater Vancouver, the MLS® HPI slipped further into negative territory, posting a 3.3 per cent year-over-year decline in February.