“The January sales figures represent a good start to 2013. While the number of transactions was down slightly compared to last year, the rate of decline was much less than what was experienced in the second half of 2012. This suggests that some buyers, who put their decision to purchase on hold last year due to stricter mortgage lending guidelines, are once again becoming active in the market,” said Toronto Real Estate Board (TREB) President Ann Hannah.

“It is interesting to note that sales were up for many home types in the GTA regions surrounding the City of Toronto. This is due, at least in part, to the additional upfront land transfer tax in the City of Toronto,” added Ms. Hannah.

“There will be enough competition between buyers in the marketplace to prompt continued growth in home prices in 2013. Expect annual average price growth in the three to five per cent range this year,” said Jason Mercer, TREB’s Senior Manager of Market Analysis. 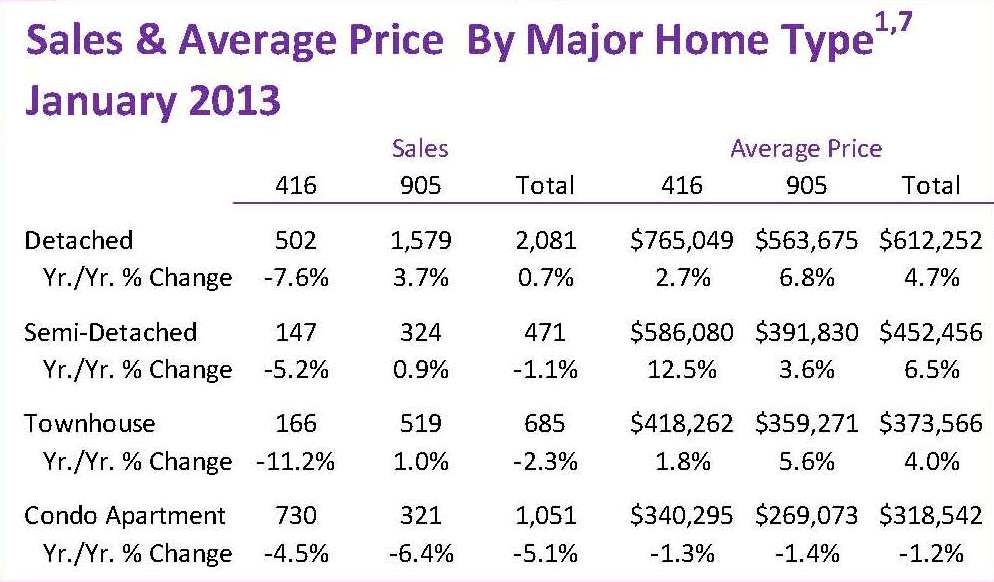 Greater Toronto REALTORS® are passionate about their work. They are governed by a strict Code of Ethics and share a state-of-the-art Multiple Listing Service. Over 36,000 TREB Members serve consumers in the Greater Toronto Area. The Toronto Real Estate Board is Canada’s largest real estate board.