Ottawa, ON– According to statistics released today by The Canadian Real Estate Association (CREA), national resale housing activity rebounded slightly in September 2012, marking the first monthly
increase since the spring.
Highlights:
The number of home sales processed through the MLS® Systems of real estate Boards and Associations in Canada rose 2.5 per cent on a month-over-month basis in September 2012. This marks the first monthly gain in activity since March 2012 and a partial recovery from the 6.2 per cent drop recorded in August in the wake of new mortgage rules.

Activity picked up in about 60 per cent of local markets in September, including Greater Vancouver, Calgary, Edmonton, Greater Toronto, and Quebec City.

Actual (not seasonally adjusted) activity nonetheless remained down 15.1 % from year-ago levels, with more than half of all local markets posting declines of at least 10 per cent.
“New mortgage rules continue to keep a lid on national sales activity,” said CREA President Wayne Moen. “That said, national figures mask diverging trends in different markets, with activity down in some places while sales elsewhere remain strong. As always, all real estate is local, so buyers and sellers should talk to their REALTOR® to understand how the housing market is shaping up where they live or might like to.”

“National activity is likely to remain down from year-ago levels over the fourth quarter of 2012,” said Gregory Klump, CREA’s Chief Economist. “In the shadow of the latest mortgage rule changes, activity has ratcheted down from higher levels seen during the fourth quarter last year. While some first time home buyers may no longer qualify for mortgage financing under the new rules, it is likely that many others are stepping back and reassessing how much house they can realistically afford, which is one of the things new mortgage rules were designed to do.”

National sales reached 110,376 units in the third quarter of 2012, down 6.5 per cent from the previous quarter. A total of 366,353 homes have traded hands over Canadian MLS® Systems so far this year, up one per cent from levels reported over the first nine months of 2011.

The number of newly listed homes rebounded by 6.5 per cent in September on a month-over-month basis after declines in each of the previous two months. Led by double-digit gains in Greater Toronto and Greater Vancouver, new supply was up in more than 60 per cent of all local markets in August, including most other large urban centres.

Calgary and Quebec City were the only two large markets where new listings eased in September, with declines of less than two per cent.

With the increase in new listings outstripping the increase in sales activity, the national housing market became further entrenched within balanced market territory in September. 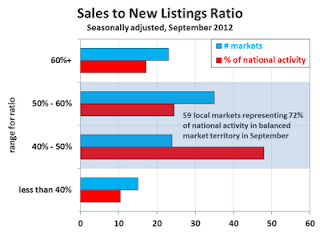 The actual (not seasonally adjusted) national average price for homes sold in September 2012 was $355,777, up 1.1 per cent from the same month last year.

Excluding Greater Vancouver (which currently accounts for less than five per cent of national activity) from the national average price calculation yields a year-over-year increase of 3.4 per cent, reflecting average sale prices that rose in 70 per cent of all local markets in September 2012.
Unlike average price, the MLS® Home Price Index (MLS® HPI) is not affected by changes in the mix of sales, so it provides the best gauge of Canadian home price trends.

The index tracks home price trends in some of Canada’s most active housing markets, including Greater Vancouver, the Fraser Valley, Calgary, Greater Toronto, and Greater Montreal. The MLS® HPI is also being developed for additional markets whose results will be included in the Aggregate Composite index. Each time an additional market joins the MLS® HPI, the Aggregate Composite index will be revised beginning with January 2005.

The Aggregate Composite MLS® HPI rose 3.9 per cent year-over-year in September 2012. This was the fifth time in as many months that the year-over-year gain shrank, and marks the slowest rate of increase since May 2011.

Year-over-year price gains decelerated for all Benchmark property types tracked by the index. The increase was strongest for one-storey single family homes (+5.7 per cent) and two-storey single family homes (+5 per cent). Prices for townhouse and apartment units continue to post more modest gains, rising 1.1 per cent and 1.5 per cent respectively.

The MLS® HPI rose fastest in Regina (14.2% year-over-year), which was the only market covered by the index in which price growth accelerated.

The MLS® HPI also climbed in Calgary (6.5%), Greater Toronto (5.7%), Greater Montreal (2.2%), and the Fraser Valley (2.1%). In Greater Vancouver, the MLS® HPI posted a 0.8 per cent year-over-year decline in September.
PLEASE NOTE: The information contained in this news release combines both major market and national MLS® sales information from the previous month.