Siskinds is involved in an effort to seek compensation for individuals throughout Canada who have Polybutylene plumbing and/or heating systems. The problems pertain to a type of piping material which could leak and cause major problems in a home's
plumbing and radiant heating systems.


Siskinds has launched a lawsuit against the 3 companies (Shell Oil, E.I. Dupont, and Hoescht Celanese Corporation) who are responsible for the defective plumbing and radiant heating system known as Polybutylene Plumbing - a system characterized by plastic pipes used in plumbing and
radiant heating. 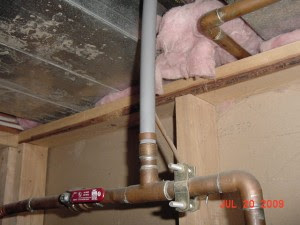 In the United States numerous complaints and lawsuits have been filed against the same companies who developed key components of the problem piping. These companies have paid millions of dollars in settlements to United States homeowners.

Identifying Polybutylene Pipe Polybutylene Pipe ("PB") is a non-rigid, sometimes curved, usually grey (or possibly silver or black) plastic pipe used in indoor plumbing. The fittings/joints connected to the PB pipe, such as elbow and tee-shaped joints can either be gray acetal/plastic inserts or copper/metal inserts.

To obtain a claim form, or for more information