The Canadian Real Estate Association (CREA) has updated its quarterly forecast for home sales activity via the Multiple Listing Service® (MLS®) Systems of Canadian real estate Boards and Associations in
2012, and extended it to 2013.

National home sales activity for 2012 and 2013 is projected to remain roughly on par with the 10 year average for annual activity, as interest rates remain low and further economic and job growth continue to support Canada’s housing market. 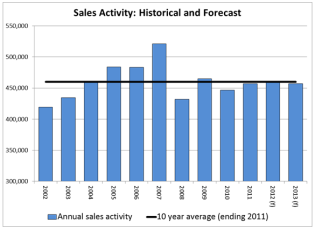 National resale housing activity is forecast to reach 458,800 units in 2012, representing an annual increase of 0.3 per cent compared to 457,305 sales in 2011. Rising demand in Alberta, Saskatchewan, and Nova Scotia, is expected to offset softer activity in British Columbia, Ontario, and New Brunswick.

“The continuation of low interest rates is good news for housing and for the economy,” said Gary Morse, CREA’s President. “Local housing market outlooks differ according to their respective economic prospects, so buyers and sellers should talk to their local REALTOR® to better understand housing market prospects in their area.”

In 2013, national sales are forecast to ebb by 0.3 per cent to 457,200 units, with modest gains in all provinces except Ontario as economic and job growth picks up later this year and builds into 2013.

So long as the European debt crisis is contained and a global economic recession avoided, low interest rates will support Canadian home sales and prices. Recent trends are reassuring, but interest rates remaining low for longer will doubtless keep the Canadian housing market under scrutiny for signs of overheating.” 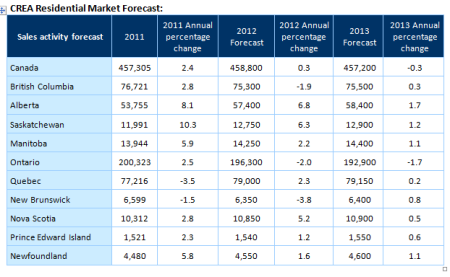 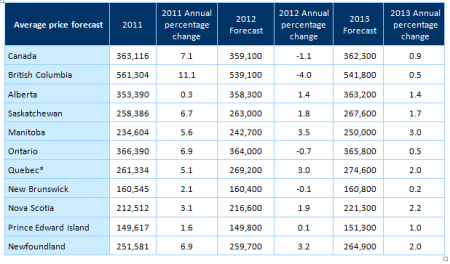