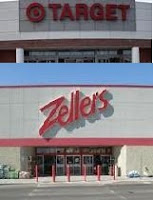 Minneapolis-based department store retailer Target Corporation reviled Thursday the locations of the first 105 stores it will open in Canada when it formally complete it’s take over from Zellers converting them into Target stores  Target said the chosen locations will
continue to operate as Zellers stores before closing for six to nine months and reopening as Target stores after completing major
renovations and remodelling. early in 2013.

"We are thrilled to share these first details about our planned entry into Canada," Target Canada president Tony Fisher said in a statement.

The locations include 45 in Ontario, 19 in Quebec , 15 in British Columbia, 13 in Alberta, five in Manitoba, two each in Saskatchewan, Nova Scotia and Newfoundland and Labrador and one each in New Brunswick and PEI.

"We are excited that these initial store sites ensure Target will be represented throughout the country."
Zellers locations that Target acquires, but does not convert to its banner, will be leased back to Zellers or potentially other retailers.

Target entry to the Canadian market is similar to the way Wal-Mart did in 1994, after the world's biggest retailer bought the chain of Woolco department stores in Canada, that were not part of The F.W. Woolworth Co stores that went bankrupt in the united States and Britain in the 1980s, By completing major renovations, remodelling then renamed them Wal-Mart Canada.

Target, a 109-year old American retailer that was part of Dayton-Hudson Corp. before changing its name in 2000, toTarget, is based in Minneapolis, has 1,755 stores in 49 states. the company has more than 355,000 employees with revenues of more than US$67 billion in its last fiscal year, it is the second-biggest discount retailer in the U.S. after Wal-Mart Stores Inc.

"This is just the first wave," Target Canada president Tony Fisher told journalists at a presentation in Chicago, saying a second wave of store sites will be announced in September.

The list announced by Target on Thursday includes sites owned by some 22 property owners and landlords with whom Target has reached lease agreements.

The company announced in January the acquisition of as many as 220 leaseholds from Zellers. Target said it hopes to finalize the acquisition of the sites quickly and pay the first half of the $1.825 billion it agreed to for the locations, in the next few days.

Hudson's Bay has 279 Zellers locations. Stores that Target does not want that could be sold to other retail giants like Wal-Mart (NYSE:WMT) Macy's , JCPenney or could remain in the hands of the Hudson's Bay

Target also announced it will establish a Canadian headquarters in Mississauga, Ont., The retailer has signed a deal for 180,000 square-feet of office space that will be occupied in early 2012 after some remodelling, it plans to spend about $10 million on each store to renovate and remodel the location before opening, Each store is expected to employ 150 to 200 people.

It will be interesting to watch other U.S. retailers take aim at Canada in the coming years and how Canadian firms respond.